After days of rumors, in a terse handwritten note released early this morning New York time, Rabbi Elya Ber Wachtfogel announced that he has not taken over leadership of Eternal Jewish Family, the conversion organization founded by Rabbi Leib Tropper, despite a press release issued by EJF late Monday announcing that Wachtfogel had taken over as EJF's rabbinic leader:

The rumors that were spread of late regarding the EJF organization, which alleged that it is under my direction, are in error and baseless.

Repeated attempts earlier in the week to reach Rabbi Wachtfogel were unsuccessful and messages, one left as recently as yesterday afternoon, have not been returned. 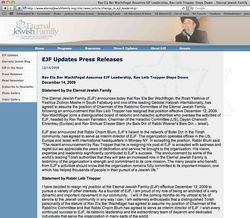 By mid-week, in private conversations sources close to leading haredi rabbis began claiming Wachtfogel had not agreed to assume rabbinic leadership of Eternal Jewish Family. EJF's founder and previous leader, Rabbi Leib Tropper, abruptly resigned over the weekend after audio tapes and a video of Tropper surfaced on the Internet.
The recordings, as yet unauthenticated, appear to chronicle Tropper discussing sexual liaisons with a woman whose conversion he was supervising. Tropper can be heard asking her to sleep with other men and to perform phone sex with them. One tape appears to capture phone sex between Tropper and the woman. Another purports to show the aftermath of a sexual encounter between this woman, Tropper and Tropper's wife.
Early this week, posters condemning Tropper were posted in haredi neighborhoods of Jerusalem:

…Leib Tropper from America who stands, so to speak, as the head of the conversion organization…he does the acts of Zimri and seeks a reward like Pinchas.…if he does not cease from this filth and from these actions, if he will not stop his work and instead will continue lying about our holy Rabbis, we will publish his disgrace publicly accompanied by terrifying pictures, photographs and video.

The woman Tropper was scheduled to have her conversion finalized yesterday. However, she told FalidMessiah.com that early this week she received an email from the beit din (religious court) notifying her that her conversion had been cancelled in what could be construed as retaliation.
Yesterday, the beit din's head rabbi refused to discuss the woman's case other than to tell FailedMessiah.com the woman had been "in the process [of converting] for 2 1/2 years," and that the current scandal was not a factor in the beit din's decision. "One has nothing to do with the other," the rabbi said.
The woman also says she has been banned from her children's school and from the Orthodox synagogue she has been attending during her conversion process. Along with his role as head of the beit din, the beit din's head rabbi also holds leadership positions in both organizations.
The woman maintains the tapes released on the Internet were only meant to be given to EJF's rabbinic leaders. She says she was shocked to learn some of these recordings had been released on the Internet and had become the focus of a public sex scandal. The woman can be heard on one of those recordings resisting Tropper's attempts to have her sleep with other men or perform phone sex with them.
Activists fighting sex abuse in the Jewish community contend the scandal highlights a common pattern of clergy abuse. “This is just one of many cases in which a member of the clergy uses their authority to lure in…unsuspecting adult women for their own personal pleasure," Vicki Polin, head of The Awareness Center, The International Jewish Coalition Against Sexual Abuse/Assault noted.
The woman told FailedMessiah.com Tropper was “holding things over me.” Tropper can be heard on one of the tapes asking the woman to have sex or phone sex with other men. She said Tropper would tell her, “If you fulfill my needs, I’ll fulfill yours – and you need a conversion.”
Tropper can be heard on the tapes saying, “I’m not going to force you to do anything you don’t want to…you own your body, I don’t own your body.”
The woman says Tropper asked her to role play certain sexual scenarios with these men, either capturing the encounter on tape or describing the encounter in detail to him afterward, but she refused. “He likes to see women raped,” the woman said. While sometimes Tropper suggested men for her to have encounters with, he encouraged her to find men on her own and then report back to him. “He wanted someone who would be very rough.”
She says other women were also recruited by Tropper to fulfill these fantasies.
One of those other women, she claims, is Tropper’s wife Leba, who the woman says engaged in a sexual relationship with her as Tropper watched. In one of the audio tapes made available to FailedMessiah.com, the woman refuses sex with other men. As Tropper persists, she tells him that she says pleadingly that she  “just wants everything to stay the same,” and says she likes "what she did with Leba.”
At one point, the woman claims she cried and told Tropper, “This feels like prostitution,” and tried to put an end to Tropper’s demands for sex with other men. She says Tropper defended his actions and continued unabated.
Tropper has been embroiled in a dispute with a former financial backer, billionaire philanthropist Guma Aguiar.
Although not the first to do so, some of the recordings sent to FailedMessiah.com came from an email address associated with Aguiar.
Aguiar has accused Tropper of embezzling money from charity funds meant for poor Israelis, charges Tropper denies.
Over the summer, Tropper accused Aguiar of assaulting him in a Jerusalem hotel room. Aguiar claims he went to Tropper's hotel room to confront Tropper about the embezzlement, and he denies assaulting Tropper.
Early this morning a spokesperson for Tropper, attorney Samuel A. Abady, threatened Israeli blogger Rabbi Daniel Eidensohn with a defamation lawsuit:

…Your postings about Rabbi Tropper are libelous and outrageous. I presume you are familiar with the common law doctrine of universal Internet jurisdiction which permits non-resident plaintiffs to sue non-resident defendants for publishing libelous materials accessible over the Internet.…Unless you immediately take down all your posts about Rabbi Tropper, I will advise him to engage counsel inside and outside Israel to sue you; Be advised that, under the doctrine of comity, Israel will enforce foreign money judgments against you, especially judgments rendered by common law courts in Britain, Australia, Canada, the U.S., etc.  I won't wait until Sunday to give Rabbi Tropper that advice.…

Mr. Abady has coauthored articles condemning the phenomenon of "libel tourism" and the Islamists who use it to harass reporters and scholars who report on Islamic terror.
Abady was disbarred by the US Supreme Court in 2008:

In June 2005, Abady was suspended from the practice of law in New York State for a period of five years. The New York Supreme Court's Appellate Division found Abady:

engaged in a pattern of serious professional misconduct, all the while demonstrating an astonishing insensitivity to his legal and ethical obligations.

Meanwhile, in May, Guma Aguiar threatened to sue Eidensohn over posts Eidensohn authored about Aguiar and his wife. Eidensohn responded by removing all related posts from his blog.
Previous Posts: 1, 2, 3.
Jewcy Conversion Exposé: 1, 2.