Members of the earth's earliest known civilization looked on in shock and confusion some 6,000 years ago as God created Heaven and Earth. 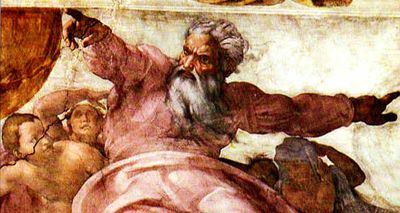 Members of the earth's earliest known civilization, the Sumerians, looked on in shock and confusion some 6,000 years ago as God, the Lord Almighty, created Heaven and Earth.

According to recently excavated clay tablets inscribed with cuneiform script, thousands of Sumerians—the first humans to establish systems of writing, agriculture, and government—were working on their sophisticated irrigation systems when the Father of All Creation reached down from the ether and blew the divine spirit of life into their thriving civilization.

"I do not understand," reads an ancient line of pictographs depicting the sun, the moon, water, and a Sumerian who appears to be scratching his head. "A booming voice is saying, 'Let there be light,' but there is already light. It is saying, 'Let the earth bring forth grass,' but I am already standing on grass."

"Everything is here already," the pictograph continues. "We do not need more stars."

Historians believe that, immediately following the biblical event, Sumerian witnesses returned to the city of Eridu, a bustling metropolis built 1,500 years before God called for the appearance of dry land, to discuss the new development. According to records, Sumerian farmers, priests, and civic administrators were not only befuddled, but also took issue with the face of God moving across the water, saying that He scared away those who were traveling to Mesopotamia to participate in their vast and intricate trade system.

Moreover, the Sumerians were taken aback by the creation of the same animals and herb-yielding seeds that they had been domesticating and cultivating for hundreds of generations.

"The Sumerian people must have found God's making of heaven and earth in the middle of their well-established society to be more of an annoyance than anything else," said Paul Helund, ancient history professor at Cornell University. "If what the pictographs indicate are true, His loud voice interrupted their ancient prayer rituals for an entire week."

According to the cuneiform tablets, Sumerians found God's most puzzling act to be the creation from dust of the first two human beings.

"These two people made in his image do not know how to communicate, lack skills in both mathematics and farming, and have the intellectual capacity of an infant," one Sumerian philosopher wrote. "They must be the creation of a complete idiot."

Members of the earth's earliest known civilization looked on in shock and confusion some 6,000 years ago as God created Heaven and Earth.
Failed messiah was established and run in 2004 by Mr. Shmarya (Scott)Rosenberg. The site was acquired by Diversified Holdings, Feb 2016.