Rubashkin will remain in jail, at least until an appeal. 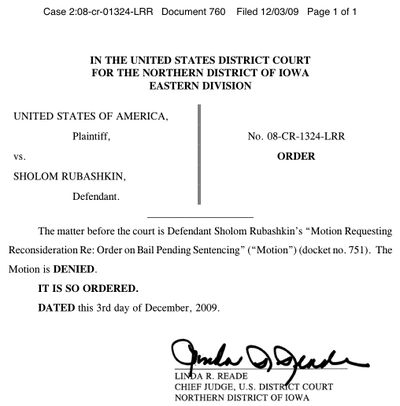 In her original decision, U.S. District Chief Judge Linda Reade wrote Sholom Rubashkin, 50, has greater incentive to flee because he faces significant jail time for financial fraud. She noted he had committed bank fraud and obstructed justice while out on bail awaiting trial.

Defense attorney Guy Cook said he will appeal the ruling to the 8th U.S. Circuit Court of Appeals in St. Louis.

Attorneys for Rubashkin had asked the court to impose additional conditions such as curfew, home detention, home incarceration and 24-hour armed surveillance, to ensure he appears for a still-undetermined sentencing date.

A Sioux Falls, S.D. jury convicted Rubashkin last month on 86 counts of bank, mail and wire fraud, money laundering and failure to pay livestock providers in a timely manner. He faces a maximum of 1,255 years in prison.

The fraud charges stem from a May 2008 immigration raid in which 389 employees were arrested. The plant has since been sold, and operates under the name Agri Star Meat and Poultry.

Rubashkin will remain in jail, at least until an appeal.
Failed messiah was established and run in 2004 by Mr. Shmarya (Scott)Rosenberg. The site was acquired by Diversified Holdings, Feb 2016.