The paper strayed from the haredi codes it has taken upon itself that stipulate that no pictures of women be published, and did so with one goal in mind – to stop the deal to free Gilad Shalit. 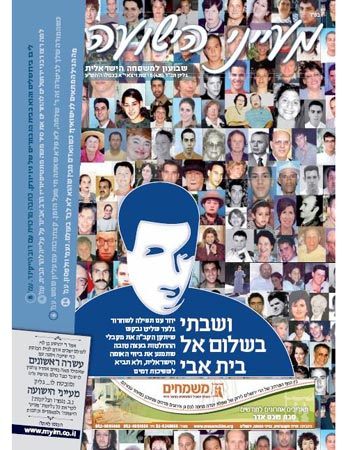 Rightist rabbis opposed to releasing Shalit in exchange for hundreds of terrorists are willing to bend some unwritten rules to thwart the swap. The Religious Zionist movement "Mayanei Hayeshua," which has an in-house rabbanit, has dedicated the front cover of its weekly publication to the cause. In addition, dozens of pictures of terror victims, most of them women, were published in the weekend edition.

In so doing, the movement strayed from the haredi codes it has taken upon itself that stipulate that no pictures of women be published in the magazine.

Alongside a caption saying "And I return in peace to my father's house" from Genesis 28:21, captured soldier Gilad Shalit's face appeared on the magazine's cover against a background of dozens of pictures of men and women, young and old, who were killed in terrorist attacks in recent years.

Underneath the pictures is the headline: "Together with praying for the release of Gilad Shalit, we will ask that the Holy One, blessed be He, guide the decision makers with good advice that will prevent the abasement of the Israeli nation and will not result in bloodshed."

Since the launch of the "Mayanei Hayeshua" magazine six years ago, the editorial staff has strictly followed the prohibition against publishing images of women in any form at their rabbis' instruction. In many instances, the publication even turned down advertisement slots even though they would have brought in more revenues for the magazine.

One of the volumes published this year showed pictures of the movement's activists with female activists' faces blacked out in a feat of graphic work that drew criticism from the liberal religious spheres.

"Mayanei Hayeshua" Director Avihai Boaron said, "It's all nonsense. The movement is indeed opposed to bringing back Gilad Shalit in exchange for a thousand murderers and the risk of slaying hundreds of Jews. It is true that we avoid publishing pictures of women in accordance with instructions from out rabbis because the Mayanei Hayeshua weekly is distributed at synagogues. However, publishing the passport pictures of the terror victims is not a even a slight waiver on this. Whoever thinks it is, or whoever finds himself 'affected' by faded a faded passport picture of a soldier murdered by a terrorist needs to get help for himself."

The policy taken by the weekly was adopted from the haredi media, which does not publish pictures of women at all. The more stringent publications even leave out women's first names in their articles, and make do with just their initial.

About two years ago, the haredi website ladaat.net graphically removed Prof. Ruth Gabizon from a picture of a press conference held on the Winograd Commission using Photoshop. Limor Livnat's face was regularly blurred when she sat around the cabinet table in her role as education minister.

The paper strayed from the haredi codes it has taken upon itself that stipulate that no pictures of women be published, and did so with one goal in mind – to stop the deal to free Gilad Shalit.
Failed messiah was established and run in 2004 by Mr. Shmarya (Scott)Rosenberg. The site was acquired by Diversified Holdings, Feb 2016.