What happens when you cross the world's largest kosher supervision organization and a YU-affiliated teaching hospital? 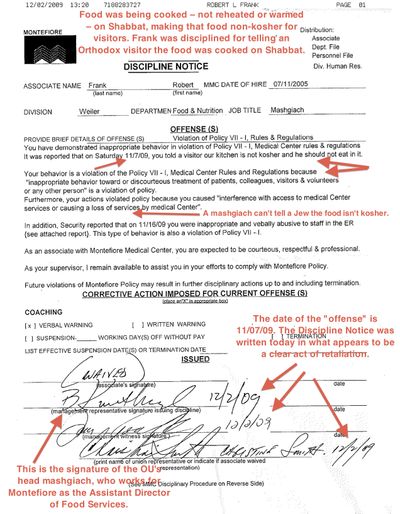 Food cooked on Shabbat – as opposed to food rewarmed on Shabbat – can only be eaten by ill people, pregnant women and very small children. But Jewish law says it can't be eaten by healthy adults.
According to Robert Frank, an OU mashgiach at Monefiore Hospital in the Bronx, Montefiore recently started cooking – not reheating or warming – food on Shabbat. When Frank saw this Orthodox Jewish visitor did not realize the food was cooked on Shabbat also was not bishul yisrael, Frank told him. And that is what Frank was written up for.
But that writeup did not happen until today – the day after I spoke with the OU's Rabbi Menachem Genack about Frank's claims of kosher violations at Montefiore, and the day after the OU decided everything in the kitchen at Montefiore was satisfactory.
This reeks of retaliation. And, quite frankly, I find it sickening.
Related Posts: Unkosher, "100 + Roaches.", Anatomy of an Incident, Mashgiach To Be Fired.

What happens when you cross the world's largest kosher supervision organization and a YU-affiliated teaching hospital?