Non-Kosher Food In An OU Supervised Kitchen: Anatomy Of An Incident

What follows are two documents: an internal Montefiore report mentioning an incident that happened on a Shabbat (sabbath) last month and the discipline report on that incident given to the mashgiach, Robert Frank, by the hospital (two pages).

This discipline report was written and signed by the OU's head mashgiach, who also is the hospital's Assistant Director of Food Service.

The hospital had a party for an employee. At that party, hot non-kosher food was served in an office adjoining the kitchen. According to Frank, this does not violate OU policy.

After the party, an employee dumped hot liquid from the non-kosher food into a stainless steel sink in the kosher kitchen. Frank saw her starting to dump the liquid but could not stop her in time.

The hospital wanted Frank to immediately kosher the sink, and demanded that he take boiling water and do this.

Frank refused because it was Shabbat, and because the sink needed to remain unused for 24 hours before koshering it.

The hospital incorrectly believed that the koshering should be done first and the 24 hour wait period should follow.

After Shabbat, Frank says he left a voicemail message for the head mashgiach and wrote a rabbis incident note and left it for him. He also tried to reach another mashgiach by phone, but was unable to reach him.

Frank was off Sunday. When he came back to work on Monday, he told the OU's head mashgiach about the incident.

Frank said the OU's head mashgiach blamed him for the incident, denied getting Frank's voicemail or note, and told Frank he would write him up for it. At this point Frank, who wasn't feeling well, vomited.

The hospital wrote this up in two different ways. In the excerpt from the internal report, the hospital blames Frank but acknowledges that he vomited. In the discipline report written by the head mashgiach, no mention is made of Frank becoming ill and he is simply accused of noncompliance.

All images can be clicked on to enlarge: 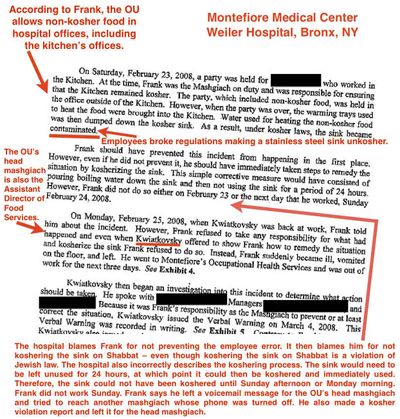 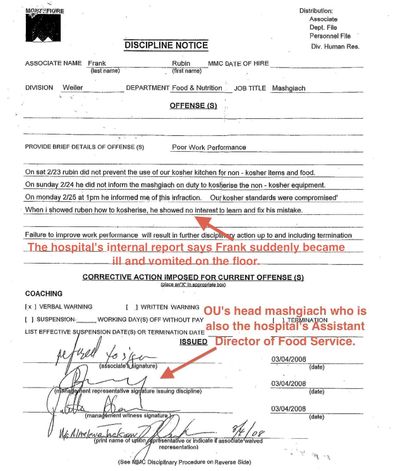 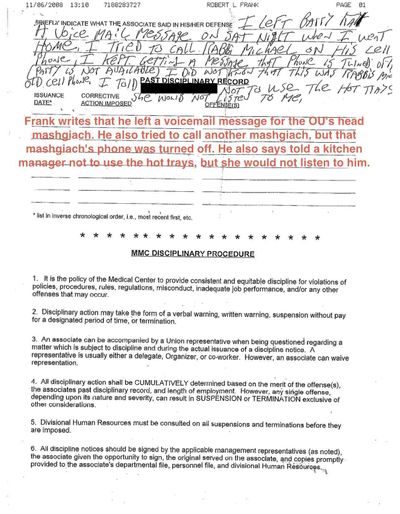 Non-Kosher Food In An OU Supervised Kitchen: Anatomy Of An Incident