Money went in and money came out – laundered. 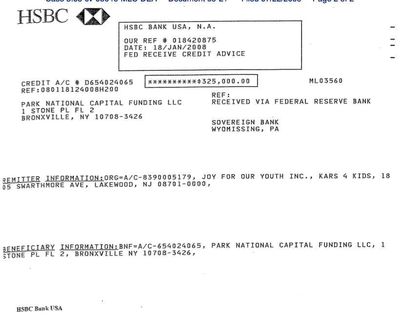 Kars4Kids has a punchy radio jingle that drives some people crazy.

But the Lakewood-based nonprofit organization — which solicits car donations for disadvantaged children — is now one of dozens of charities embroiled in a federal court fight involving allegations of a massive, international Ponzi scheme.

At issue are millions in payments to Kars4Kids and more than 60 other registered charities, some of which appear to have quickly kicked the donations back to the donors, often in the space of days, according to court papers.

The allegations don’t involve money that’s generated when cars are donated to the charity. Instead, the court papers suggest the man at the center of everything, 34-year-old Eliyahu Weinstein, made multimillion-dollar payments to Kars4Kids and other charities as a way to hide assets.

Weinstein, a member of Lakewood’s ultra-Orthodox Jewish community, and a former used car salesman, is being sued by former partners across two continents who say he duped many of them — most of whom are also members of Orthodox Jewish communities — promising to invest their money in projects that did not exist.

The court filings say Weinstein diverted the funds as part of a complicated pyramid scheme, and also accuse him of trying to hide the money by funneling it through nonprofit organizations like Kars4Kids, as well as two religious charities now the focus of federal money laundering investigations in New Jersey and California.

Parking money in a charity would be like putting it in a secret Swiss bank account, keeping it hidden from creditors, angry investors, the government, or civil court judgments. It might then be redirected in any number of ways.

Attorney Ari Weisbrot of Hackensack, who is representing one of the investors, contends the paper trail of money had all the hallmarks of an elaborate scam.

"There may be potentially legitimate explanations for those transfers," he said. "But in my opinion, they carry the scent of money laundering."

Weinstein, through his attorneys, denied any wrongdoing. He has not been charged with any crime and has not been not mentioned in any of the documents connected with either criminal probe.

In a recent letter to the federal District Court judge in the case, he called the accusations against him "frivolous, scurrilous, baseless allegations of fraud" which he said "seek to tie me to money laundering by innuendo."

He said he had repaid many of his investors millions of dollars, in one case "arranging for repayment by transferring to plaintiffs ancient scrolls that experts have concluded are over 1,200 years old that he estimated at being worth between $8 million and $12 million. He said he repaid another by transferring rights to the purchase of certain properties in Israel.

Kars4Kids officials called the allegations "wildly speculative," and said the payments cited by Weisbrot were the result of the sale of real estate.

In the civil fraud complaints filed against him, Weinstein has been accused by former partners in North America and Europe of taking more than $470 million through complex real estate deals in New Jersey, Pennsylvania, Florida, Great Britain and Israel. The deals, they allege, never materialized and the money disappeared. In at least two cases, former partners say he sold property he did not own.

Weisbrot, who represents Florida investor Harvey Wolinetz, believes the funds were used to repay other victims.

Bank records obtained in the course of the litigation show that Weinstein sent more than $84 million out of his accounts to as many as 69 charities. According to court documents, an incomplete accounting shows more than $38.4 million of that subsequently came back as checks to those who Weinstein owed money, or to companies tied to him — sometimes within days. In several cases, checks he wrote out to one charity were cashed by the organization after they were endorsed by one of his own employees.

"While under other circumstances the payments would be praiseworthy, the fact that the same money later reappears for Weinstein’s personal use leads to only one conclusion — he is using these organizations to hide his assets," charged Weisbrot in one court filing. "It is without dispute that Weinstein sent tens of millions of dollars to entities that he controlled — disguised as charities — and then filtered the money back to his own uses."

If the allegations are true, it would mark the first evidence of a common thread between the country’s two biggest federal money laundering investigations — one in New Jersey, the other centered mostly in California.

The records obtained by Weisbrot show some of the money went through a charity operated by Rabbi Eliahu Ben Haim, the principal rabbi at Congregation Ohel Yaacob in Deal. Ben Haim was charged in July with money laundering, as part of a undercover sting operation by the FBI.

Other checks tied to Weinstein were paid into another charity, an organization tied to a separate underground money laundering investigation by federal prosecutors in California.

Brooklyn attorney Gary Ginsburg, speaking for Weinstein, said there could be any number of explanations for the transfers besides money laundering, but could not explain the circumstances of the transfers.

"There are other alternatives. How about if you loaned money to an institution and they were returning the loan?" suggested Ginsburg.

A lawyer for Kars4Kids said the payments, through a wire transfer, were only the result of a property sale.

"We have no reason to believe anything untoward has taken place," said attorney Ronald Coleman of Glen Rock. "There has been no attention from law enforcement. We’re not a party to this case. And we’ve made all the documentation we have available to the lawyer in the case."

The U.S. Attorney’s Office for the District of New Jersey declined comment.

I've had some of these documents for several months.One is posted above. Joy For Our Youth is one of Oorah's organizations, as is Kars4Kids.

The haredi world is about to implode.
The Plaintiffs' Legal Case Against Weinstein (PDF):

Money went in and money came out – laundered.