Letter from Jerusalem: Under Cover With Women Of The Wall

A struggle for the character of the Western Wall, this city’s iconic Jewish holy site and central place of worship, is under way, and it is being fought with prayer shawls and Torah scrolls. 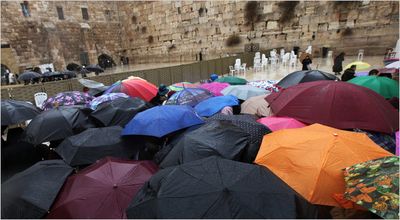 JERUSALEM — A struggle for the character of the Western Wall, this city’s iconic Jewish holy site and central place of worship, is under way, and it is being fought with prayer shawls and Torah scrolls.

On Friday, sheets of rain obscured the Old City’s ancient domes. But by 7 a.m. about 150 Jewish women had gathered at the Western Wall to pray and to challenge the constraints imposed on them by traditional Jewish Orthodoxy and a ruling by the Israeli Supreme Court.

Under their coats many of the women, supporters of a group of religious activists called Women of the Wall, wore a tallit, or fringed prayer shawl, a ritual garment traditionally worn only by men. Some wore their prayer shawls openly, an illegal act in this particular setting that can incur a fine or several months in jail.

Last month Nofrat Frenkel, 28, an Israeli medical student and a committed follower of Conservative Judaism, a modern, egalitarian strain, was the first woman in Israel to be arrested during prayers at the Western Wall, also known as the Kotel, for publicly wrapping herself in a tallit.

The police accused her of acting provocatively and in a way that upset public order. Ms. Frenkel said the investigation was still under way.

The Women of the Wall, who meet for prayers at the Kotel at the start of every Hebrew month, are at the vanguard of a feminist struggle in Orthodox Judaism and other more contemporary strains to adapt time-honored religious practice for the modern age. They came in droves on Friday, the first day of the Hebrew month of Tevet, to express their outrage over Ms. Frenkel’s case.

Anat Hoffman, chairwoman of Women of the Wall, which was founded in 1988, said she had never seen so many turn up in the month of Tevet.

“We are pushing the envelope. History is made of moments like this,” she said.

The group’s activities present a head-on challenge to the religious establishment, which is dominated in Israel by Orthodox rabbis who interpret and apply the rules of religious law in their strictest form.

The Kotel is defined in Israel as a national and holy site that is open to all. In practice, the women say, it operates like an Orthodox synagogue, with separate prayer sections for men and women and a modesty patrol to ensure that visitors are appropriately dressed.

Traditional Orthodox women pray individually, and quietly, by the Kotel’s massive beige stones, a remnant of the retaining wall of the mount revered by Jews as the site where their ancient temples once stood. Al Aksa mosque now sits on the top of the mount.

Critics of the Women of the Wall say that their practices — like holding organized prayers, singing out loud, carrying a Torah scroll and wearing prayer shawls — offend the more traditional worshipers at the site.

Twenty years ago, having suffered verbal and physical abuse as they prayed, the Women of the Wall petitioned the Supreme Court to have their right to religious freedom recognized, on grounds that the Kotel does not belong to the Orthodox establishment alone.

After a lengthy legal battle, the court ultimately ruled against the women in the interest of public order. Consequently, it is illegal for them to read aloud from the Torah or to wear prayer shawls openly by the wall. Instead, the authorities have allocated them a special area where they can conduct services in their own fashion, in an archaeological garden tucked around a corner, out of sight.

“These women come here like a persecuted group,” said David Barhoum, a criminal lawyer there on behalf of the Women of the Wall. If anything, he said on Friday, the criminal behavior seemed to be coming from the other side.

Across a partition, in the men’s section of the Kotel, a group of ultra-Orthodox men gathered to harass the women as they sang and prayed. The men shouted “Gevalt!” — expressing their revulsion in Yiddish — and called the women’s prayer an abomination. One or two threw objects and spat at them. In the women’s section, some Orthodox female worshipers joined in the insults.

Jewish religious law is open to interpretation. The Women of the Wall argue that even according to some Orthodox opinions, they are doing nothing wrong.

“Women are exempt from carrying out certain commandments, but not forbidden,” said Ms. Frenkel, who kept her prayer shawl hidden beneath her jacket by the Kotel this time around.

But the rabbi of the Western Wall, Shmuel Rabinowitz, said “there is no value to prayer that creates controversy and offends other female worshipers” at the site.

The dispute is not about interpretations of religious law, he added, but about the sanctity and the accepted custom of the place. “On Friday the heavens wept,” he said.

Others saw the rain as a blessing in this parched land. The downpour was “so fitting,” said Simonne Horwitz, an assistant professor at the University of Saskatchewan in western Canada, who said she had flown in especially for the event.

By and large, the inclement weather was on the side of the police who were sent to uphold the law and keep the peace.

There had been a plan for the women concealing their prayer shawls to open their coats, but Ms. Hoffman said most did not want to because of the storm.

Plans to take out a Torah scroll at the Kotel, and perhaps to read from it, were also aborted for fear the parchment would be damaged by the rain. Even so, one of the scrolls ended up with water stains.

Whether or not it was an act of divine intervention, the deluge allowed everyone to claim victory — the drenched women, their detractors and the police. The women were obviously wearing prayer shawls at the wall, but no arrests were made.

Here's what happened according to Ha'aretz. Note the Times seems to have missed what the haredi were yelling:

Confrontation broke out in the Western Wall on Friday, as Haredi worshippers protested an attempt by members of a women's organization to conduct a massive prayer session at the holy site by calling out "not-Jews" and "Nazis," Army Radio reported on Friday.

About 200 members of the "Women of the Wall" organization arrived at the Western Wall in order to take part in the monthly Rosh Hodesh prayer, and to protest the arrest of their fellow member at the site.

Police officers separated the two sides after Haredi worshipers approached the women's group members and yelled out "not Jewish, send them to church," and "Nazis, blasphemy."

Chairman of the "Women of the Wall" organization, Anat Hoffman, saud that the group's actions were not meant a provocation but as a silent protest against the government's holy site bill which she claims discriminates against women.

Last month, police arrested Nofat Frankel who was praying at the Western Wall in Jerusalem, due to the fact that she was wrapped in a prayer shawl (tallit).

Police were called to the area after the group asked to read aloud from a Torah scroll.

Police said they arrested the women in the wake of a High Court ruling, which states that the public visiting the Western Wall is obligated to dress in accordance with the site's dress code.

Western Wall Rabbi Shmuel Rabinowitz had said the act was a provocation meant to turn the wall into a fighting ground. "We must distance politics and disagreement from this sacred place," Rabinowitz said.

Letter from Jerusalem: Under Cover With Women Of The Wall

A struggle for the character of the Western Wall, this city’s iconic Jewish holy site and central place of worship, is under way, and it is being fought with prayer shawls and Torah scrolls.
Failed messiah was established and run in 2004 by Mr. Shmarya (Scott)Rosenberg. The site was acquired by Diversified Holdings, Feb 2016.