Is It Kosher? Scientists Grow Meat In Lab

The lab-grown meat could be on sale within five years.

Scientists 'grow' meat in laboratory
The move towards artificially engineered foods has taken a step forward after scientists grew a form of meat in a laboratory for the first time.
By Nick Britten • London Daily Telegraph 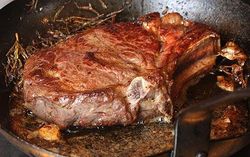 Researchers in the Netherlands have created what was described as soggy pork and are now investigating ways to improve the muscle tissue in the hope that people will one day want to eat it.

No one has yet tasted the product, but it is believed the artificial meat could be on sale within five years.

Vegetarian groups welcomed the news, saying there was “no ethical objection” if meat was not a piece of a dead animal.

Mark Post, professor of physiology at Eindhoven University, said: “What we have at the moment is rather like wasted muscle tissue. We need to find ways of improving it by training it and stretching it, but we will get there.

“This product will be good for the environment and will reduce animal suffering. If it feels and tastes like meat, people will buy it.

“You could take the meat from one animal and create the volume of meat previously provided by a million animals.”

The scientists extracted cells from the muscle of a live pig and then put them in a broth of other animal products. The cells then multiplied and created muscle tissue. They believe that it can be turned into something like steak if they can find a way to artificially "exercise" the muscle.

The project is backed by the Dutch government and a sausage maker and comes following the creation of artificial fish fillets from goldfish muscle cells.

Meat and dairy consumption is predicted to double by 2050 and methane from livestock is said to currently produce about 18 per cent of the world’s greenhouse gases.

It was supported by animal rights campaigners. A spokesman for Peta said: “As far as we’re concerned, if meat is no longer a piece of a dead animal there’s no ethical objection.”

However the Vegetarian Society said: “The big question is how could you guarantee you were eating artificial flesh rather than flesh from an animal that had been slaughtered.

“It would be very difficult to label and identify in a way that people would trust.”

The advent of meat grown for consumers could reduce the billions of tons of greenhouse gases emitted each year by farm animals and help meet the United Nation’s predictions that meat and dairy consumption will double by 2050.

However, the latest breakthrough is certain to cause concern amongst the anti-GM lobby.

Last week Prince Charles, a fierce opponent of GM food, warned that people were creating problems by “treating food as an easy commodity rather than a precious gift from nature”.

His comments came as the results of a survey commissioned by the Food Standards Agency revealed concerns about long-term health and environmental impacts of genetically modified products.

It showed shoppers want to be told when meat and milk from cows is genetically modified through clear labelling.

GM supporters say they are aware of risks associated with "engineered" food but believe it benefits the Third World.

Would lab-manufactured meat be kosher? Or would halakha limit consumption to meat manufactured from cells taken from kosher-slaughtered animals? If so, would it matter if the animal was glatt? Who the shochet was? Would pork made this way be kosher?

Posted at 09:39 AM in Ethics, Food, Halakha, Kosher Scandal | Permalink

Is It Kosher? Scientists Grow Meat In Lab

The lab-grown meat could be on sale within five years.
Failed messiah was established and run in 2004 by Mr. Shmarya (Scott)Rosenberg. The site was acquired by Diversified Holdings, Feb 2016.