"A proposal was raised in the coordination committee to inform the Polish government that we want to institute selection in aliyah, because we cannot continue accepting sick and handicapped people." 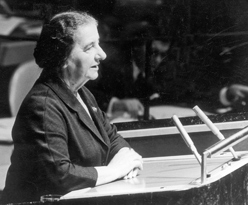 "A proposal was raised in the coordination committee to inform the Polish government that we want to institute selection in aliyah, because we cannot continue accepting sick and handicapped people. Please give your opinion as to whether this can be explained to the Poles without hurting immigration," read the document, written by Meir to Israel's ambassador to Poland, Katriel Katz.

The letter, marked "top secret" and written in April 1958, shortly after Meir became foreign minister, was uncovered by Prof. Szymon Rudnicki, a Polish historian at the University of Warsaw.

In recent years, Rudnicki has been researching documents shedding light on Israeli-Polish relations between 1945 and 1967.

The document had not been known to exist before this time, and scholars of the mass immigration from Poland to Israel that took place from 1956 to 1958 were unaware of Israel's intent to impose a selection process on Jews leaving Poland - survivors of the Holocaust and its death camps.

The "coordination committee" Meir refers to was a joint panel consisting of representatives of the government and the Jewish Agency.

Rudnicki's study, undertaken together with Israeli scholars headed by Prof. Marcos Silber of the University of Haifa, has already been published in a book in Polish.

The Hebrew version of the book will be published in a few months. However, the document containing the suggestion about the selection process does not appear in the book because it did not impact relations between the two countries.

"Although there are numerous documents on the issue of immigration, we did not find in the archives of Israel or Poland - where they also opened the party archive for us - any response to this request by Golda to the ambassador in Poland," Rudnicki told Haaretz. "In this respect, the document remains an internal matter of Israel," he said.

However, Rudnicki concedes that the content of the document surprised him as a scholar and a Jew.

"This is a very cynical document," he said. "It is known that Golda was a brutal politician who defended interests more than people."

Katz died more than 20 years ago, and no proof has been found that anything was done regarding the foreign minister's query.

In the first wave, in 1950, Poland prevented anyone who had professions essential to Polish economy and society from leaving, including Jewish doctors and engineers. With the rise to power of president Wadyslaw Gomulka and his initiation of reforms at the beginning of what became known as the "Golmuka thaw," the Polish government allowed people with professions more in demand to leave the country, including Jews who had taken up senior positions in the Communist Party.

"Until 1950, there was indeed selection by the Poles on the basis of professions in demand," Rudnicki said. "After 1956 the Poles imposed no limitations, and certainly did not intentionally send handicapped and aged people to Israel. That is an Israeli story, not a Polish one," the historian said.

During the years to which the document refers, waves of immigration were also underway from other countries, placing a heavy burden on the young state.

Statistics show that the rate of immigration at that time was similar to that at the height of immigration from the former Soviet Union from 1990 to 1999.

Posted at 03:52 AM in Ethics, History, Israel, Jewish Leadership | Permalink

"A proposal was raised in the coordination committee to inform the Polish government that we want to institute selection in aliyah, because we cannot continue accepting sick and handicapped people."
Failed messiah was established and run in 2004 by Mr. Shmarya (Scott)Rosenberg. The site was acquired by Diversified Holdings, Feb 2016.