"The cops told them they wouldn't get arrested, but the police must have come under pressure by the Hasidim," said Baruch Herzfeld, the unofficial spokesman for the pro-bike-lane group. 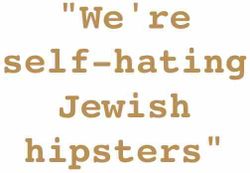 Police yesterday busted two of the hipster Brooklyn cyclists who repainted whole sections of Williamsburg bike lanes the city had just removed at the request of the neighborhood's Hasidic community.

Quinn Hechtropf, 26 and Katherine Piccochi, 24 -- who surrendered hours after posting a video of the guerilla public-works operation on YouTube -- allegedly used paint rollers and stencils to recreate all the markings that had been sandblasted away.

"We're self-hating Jewish hipsters," Hechtropf joked last night as the two walked out of the 90th Precinct with desk-appearance tickets.

"They handcuffed us," Piccochi complained

Both were hit with criminal-mischief charges as well as a violation for defacing the street.
The neighborhood patrol Shomrim grabbed Hechtropf and Piccochi in the incident at 3:30 a.m. Monday. Cops took their names but at the time did not arrest them.

"The cops told them they wouldn't get arrested, but the police must have come under pressure by the Hasidim," said Baruch Herzfeld, the unofficial spokesman for the pro-bike-lane group. 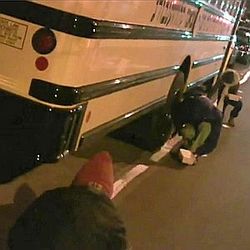 Detectives asked them to come in to the precinct and they did, accompanied by a lawyer.

Cyclists have decried the removal of the bike lanes, but many Hasidic residents had complained that all the bikers whizzing by posed both safety and spiritual risks to the community.

Many of the hipster cyclists wear too little clothing for the Hasids, who are not supposed to stare at members of the opposite sex and wanted the enticement removed.

Herzfeld contends the activists were comprised of both Hasidic and hipster riders unhappy with the removal of the 14-block bike lane. On the video, the team is shown repainting the lanes with rollers as a pulsating rhythm plays in the background. They used a stencil and spray paint to recreate a bicyclist icon on the roadbed at Bedford Avenue and Williamsburg Street.

The group's message appears in white text on a black background:

"We are New York City bicyclists and our message is clear. Don't take away our bike lanes. We use this stretch of Bedford Avenue because it is a direct route to the Williamsburg Bridge.

"We will continue to use it whether or not there is a bike lane here, but not having one puts us at greater risk from cars."

The statement says the group will restore the lane markings if they're removed again.

And the city Transportation Department said it will remove any unauthorized markings.

Hasidic residents complain they are being portrayed as the enemy, when it is the cyclists who are breaking the law.

"That unauthorized painting on New York City property is unlawful, but that is overlooked because it's committed against the terrible Hasidim," Moshe Goldberger said.

"The cops told them they wouldn't get arrested, but the police must have come under pressure by the Hasidim," said Baruch Herzfeld, the unofficial spokesman for the pro-bike-lane group.
Failed messiah was established and run in 2004 by Mr. Shmarya (Scott)Rosenberg. The site was acquired by Diversified Holdings, Feb 2016.