'Convert to be buried outside cemetery'
Matthew Wagner • THE JERUSALEM POST 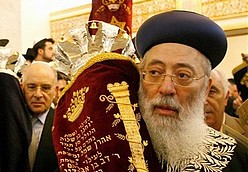 Chief Sephardi Rabbi Shlomo Amar ruled Sunday that a 13-year-old boy who passed away over the weekend in Madrid had to be buried in a separate burial section demarcated by a row of trees because he had converted to Judaism in a Conservative rabbinical court.

Ben-David was buried Sunday in a special section of Madrid's Jewish cemetery reserved for people whose Jewishness is in question.

"We are an Orthodox community and we never had a situation like this before," said Ben-Dahan, speaking by phone from Madrid.

"The Rishon Lezion [Amar] told us that this was the Halacha, to bury him in a separate area. He gave us clear directions on this issue."

According to Halacha, non-Jews or people whose Jewishness has not been confirmed cannot be buried together with Jews. Conservative practice also forbids the burial of non-Jews with Jews, but Orthodox rabbis do not recognize the validity of a Conservative conversion.

Rabbi David Golinkin, president and rector of the Conservative Schechter Institute in Jerusalem, ruled that one of the reasons for separating Jews and non-Jews in a cemetery is to combat intermarriage.

Amar was in Madrid for a Hanukka candlelighting ceremony and could not be reached for comment.

Ben-Dahan said that originally the funeral procession was supposed to go through a side gate not used in Jewish funerals. This was because a line of trees cut off the plots where Ben-David was being buried from the rest of the cemetery.

"But in the end we downed a few trees to make it possible to go through the main gate," he said.

Gai Ben-David, who celebrated his bar mitzva in June, died from a brain tumor.

About a year ago he, his mother, Jessica, and his sister converted to Judaism at the Ahavat Shalom Congregation in Fort Worth, Texas.

Gai's father, Zohar Ben-David, an Israeli emigre, told the Post via telephone that he had to fight for the right to have the funeral process go through the front gate of the cemetery.

"I was completely opposed to any suggestion that my son is not a Jew," said Ben-David. "Gai was more Jewish than anyone.

"But eventually I decided not to go on with the objections. It was causing a lot of pain to the people who love Gai. In the end the ruling of the Rishon Lezion was honored. Gai was buried beyond the cemetery in a separate area."

Ben-David said that members of the Masorti (Conservative) community in Madrid were putting together a petition declaring that all members would be buried in the same area where Gai was buried.

"People told me that when their time comes, they want to buried together with Gai."

Ben-David, who works as a project manager for a telecommunications company in Madrid, said that he had no intention of attacking anyone in the community.

"Many good people from the Orthodox community have helped me and shown me support. I am just sad about the situation.

"Gai learned in the Jewish school in Madrid. He was an angel and he had so much love. He was a very, very special person, and I hope that he will unite something in the Jewish community."

Posted at 10:58 AM in Haredim, Sefardim | Permalink

13 year old died from a brain tumor. Rabbi Amar bans burial in Jewish cemetery.
Failed messiah was established and run in 2004 by Mr. Shmarya (Scott)Rosenberg. The site was acquired by Diversified Holdings, Feb 2016.