« "Agriprocessors…Was Basically The Bottom Of the Barrel. It Was Bad As Bad Can Be." | Main | Haredim Plan Mass Protest Against Intel Tomorrow »

A victim and Rabbi Nochem Rosenberg confronted Greenfeld in November. Greenfeld was arrested this week on three molestation-related counts.

Greenfeld Agreed To Quit Teaching In November Because His Of Alleged Molesting Of Children
Yerachmiel Lopin • FrumFollies.Wordpress.com (Cross Posted To FailedMessiah.com)
David Yehudah Greenfeld, who was arrested on December 23rd on 3 charges related to child molesting, agreed to quit teaching over 6 weeks earlier according to Rabbi Nochem Rosenberg of Williamsburg.
Rabbi Rosenberg secured the agreement in writing after confronting Greenfeld with his victim at the Mosholow School in Boro Park on Thursday November 12, 2009. 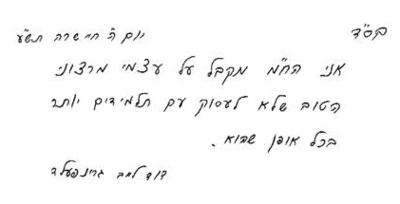 Rabbi Rosenberg shared a copy of the note with me. He says the original is now in the possession of the NYPD officials in the Sex Crimes Unit in Brooklyn, but they provided him with a receipt.
According to Rabbi Rosenberg, the school removed Greenfeld from classroom duties, but it took a while more before they removed him from all contacts with children.
Text of letter
5th day [Thursday], [week of parashat] Chaye Sarah —
November 12, 2009
With the help of Heaven.
I the undersigned, freely agree not to involve myself with
students anymore, in any manner.
Duvid Leib Greenfeld
Note- The signed middle name Leib is Yiddish for Yehudah as is Yidde.
According to Rabbi Rosenberg, the school first removed Greenfeld from classroom duties, and then, gradually, from other contact with children.
––––––––––––––––––––––––
Earlier today a Borough Park source emailed me (Shmarya) about Greenfeld:

About 5-6 years ago, Rabbi David Y. Greenfeld was hired as a Rebbe by the Klausenburger Yeshivah Chazar Hakodesh, when the mother of a boy that was molested by Greenfeld found out, she phoned the then Menahel, Rabbi Yaakov Yitzchok Moskowitz (a Belzer chased), and he fired him the next day.

A victim and Rabbi Nochem Rosenberg confronted Greenfeld in November. Greenfeld was arrested this week on three molestation-related counts.