Protesters divided the walking routes leading up the government offices in Jerusalem for men and women on Sunday morning in protest against the segregated bus lines in public transportation in the capital. 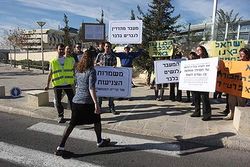 A mock "chastity squad" divided the walking routes leading up the government offices in Jerusalem for men and women on Sunday morning in protest against the segregated bus lines in public transportation in the capital.

The protestors, some 20 activists of the Yerushalmim movement handed out fliers outside the Supreme Court building which directed pedestrians to their designated pavement according to their sex.

The aim of the protest is to pressure Transportation Minister Yisrael Katz into accepting the public committee's recommendations regarding the legality of the "mehadrin lines".

Katz was expected to deliver his decision Sunday to the High Court of Justice.

The demonstrators held up signs which read, "Passersby! We implore you to adhere to complete separation between men and women in the government compound. Men are required to move to the right side and women to the left side. Mothers are required to separate from their children and husbands. Please do not disrupt our lifestyle of god-fearing Jews, God and his Torah."

The fliers handed out to passersby stated "No more! The Transportation Ministerial Committee has determined that mehadrin bus lines are illegal – it's discrimination. What is the minister waiting for? Accept the committee's conclusions and put an end, once and for all, to the segregated bus lines."

Jerusalem city councilwoman Rachel Azaria, one of the protest's organizers said, "This is a reminder to the transportation minister who is required to accept his ministry's committee's recommendations which ruled that the mehadrin bus lines are illegal."

She stated that the segregated bus lines "hurt a large public including haredi men and women who oppose them. It offends the rule of law and constitutes a danger to life in the public sphere in the capital. We all know it starts with this but will end far worse places."

Shimon Stern, spokesman for the "rabbis' committee for transportation affairs" said that the committee's representatives are in constant contact with Transportation Ministry officials and estimated that Minister Katz will accept those clauses in the committee's report which allow the operation of the segregated bus lines in a voluntary framework.

Commenting on the assertion that the lines are illegal Stern noted, "The committee wasn't authorized for that. Even the petitioners didn't ask that the lines be shut down, but to maintain regular corresponding lines." Stern stated that the committee behaved in a manner which suggested it was overrides the High Court of Justice.

He noted that the court asked the Transportation Ministry to regulate the mehadrin lines and not determine whether they were legal and added that the rabbis accept the recommendations which allow backdoors in those buses to be opened and allow payment there.

'No coercion by haredim'
"When the committee ruled that the separation was prohibited coercion it outlawed something which does not exist. This is because there is no coercion or violence in the separated buses on the part of the haredim," Stern noted.

The report filed with the High Court indicated that the separation between men and women in public mehadrin lines was illegal. The conclusions' draft of the Transportation Ministry's professional committee suggests that the arrangement is illegal and that any person is entitled to sit where he wishes in public transportation.

Nevertheless, the committee stressed that separation can be maintained according to the passengers' will but not in buses of public companies.

The transportation minister has yet to officially decide on the recommendations; however the State Prosecutor's Office chose to file the report nonetheless.

Protesters divided the walking routes leading up the government offices in Jerusalem for men and women on Sunday morning in protest against the segregated bus lines in public transportation in the capital.
Failed messiah was established and run in 2004 by Mr. Shmarya (Scott)Rosenberg. The site was acquired by Diversified Holdings, Feb 2016.