Who Is a Jew? Court Ruling in Britain Raises Question

“This is potentially the biggest case in the British Jewish community’s modern history.”

Who Is a Jew? Court Ruling in Britain Raises Question
By SARAH LYALL • New York Times

LONDON — The questions before the judges in Courtroom No. 1 of Britain’s Supreme Court were as ancient and as complex as Judaism itself.

Who is a Jew? And who gets to decide?

On the surface, the court was considering a straightforward challenge to the admissions policy of a Jewish high school in London. But the case, in which arguments concluded Oct. 30, has potential repercussions for thousands of other parochial schools across Britain. And in addressing issues at the heart of Jewish identity, it has exposed bitter divisions in Britain’s community of 300,000 or so Jews, pitting members of various Jewish denominations against one another.

“This is potentially the biggest case in the British Jewish community’s modern history,” said Stephen Pollard, editor of the Jewish Chronicle newspaper here. “It speaks directly to the right of the state to intervene in how a religion operates.”

The case began when a 12-year-old boy, an observant Jew whose father is Jewish and whose mother is a Jewish convert, applied to the school, JFS. Founded in 1732 as the Jews’ Free School, it is a centerpiece of North London’s Jewish community. It has around 1,900 students, but it gets far more applicants than it accepts.

Britain has nearly 7,000 publicly financed religious schools, representing Judaism as well as the Church of England, Catholicism and Islam, among others. Under a 2006 law, the schools can in busy years give preference to applicants within their own faiths, using criteria laid down by a designated religious authority.

By many standards, the JFS applicant, identified in court papers as “M,” is Jewish. But not in the eyes of the school, which defines Judaism under the Orthodox definition set out by Jonathan Sacks, chief rabbi of the United Hebrew Congregations of the Commonwealth. Because M’s mother converted in a progressive, not an Orthodox, synagogue, the school said, she was not a Jew — nor was her son. It turned down his application.

That would have been the end of it. But M’s family sued, saying that the school had discriminated against him. They lost, but the ruling was overturned by the Court of Appeal this summer.

In an explosive decision, the court concluded that basing school admissions on a classic test of Judaism — whether one’s mother is Jewish — was by definition discriminatory. Whether the rationale was “benign or malignant, theological or supremacist,” the court wrote, “makes it no less and no more unlawful.”

The case rested on whether the school’s test of Jewishness was based on religion, which would be legal, or on race or ethnicity, which would not. The court ruled that it was an ethnic test because it concerned the status of M’s mother rather than whether M considered himself Jewish and practiced Judaism.

“The requirement that if a pupil is to qualify for admission his mother must be Jewish, whether by descent or conversion, is a test of ethnicity which contravenes the Race Relations Act,” the court said. It added that while it was fair that Jewish schools should give preference to Jewish children, the admissions criteria must depend not on family ties, but “on faith, however defined.”

The same reasoning would apply to a Christian school that “refused to admit a child on the ground that, albeit practicing Christians, the child’s family were of Jewish origin,” the court said.

The school appealed to the Supreme Court, which is likely to rule sometime before the end of the year.

The case’s importance was driven home by the sheer number of lawyers in the courtroom last week, representing not just M’s family and the school, but also the British government, the Equalities and Human Rights Commission, the United Synagogue, the British Humanist Association and the Board of Deputies of British Jews.

Meanwhile, the Court of Appeal ruling threw the school into a panicked scramble to put together a new admissions policy. [Please see below.] It introduced a “religious practice test,” in which prospective students amass points for things like going to synagogue and doing charitable work.

That has led to all sorts of awkward practical issues, said Jon Benjamin, chief executive of the Board of Deputies of British Jews, because Orthodox Judaism forbids writing or using a computer on the Sabbath. That means that children who go to synagogue can’t “sign in,” but have to use methods like dropping prewritten postcards into boxes.

It is unclear what effect the ruling, if it is upheld, will have on other religious schools. Some Catholic schools, accustomed to using baptism as a baseline admissions criterion, are worried that they will have to adopt similar practice tests.

The case has stirred up long-simmering resentments among the leaders of different Jewish denominations, who, for starters, disagree vehemently on the definition of Jewishness. They also disagree on the issue of whether an Orthodox leader is entitled to speak for the entire community.

“Whatever happens in this case, there must be some resolution sorted out between different denominations,” Mr. Benjamin said in an interview. “That the community has failed to grasp this has had the very unfortunate result of having a judgment foisted on it by a civil court.”

Orthodox Jews, of course, sympathize with the school, saying that observance is no test of Jewishness, and that all that matters is whether one’s mother is Jewish. So little does observance matter, in fact, that “having a ham sandwich on the afternoon of Yom Kippur doesn’t make you less Jewish,” Rabbi Yitzchak Schochet, chairman of the Rabbinical Council of the United Synagogue, said recently.

Lauren Lesin-Davis, chairman of the board of governors at King David, a Jewish school in Liverpool, told the BBC that the ruling violated more than 5,000 years of Jewish tradition.

“You cannot come in and start telling people how their whole lives should change, that the whole essence of their life and their religion is completely wrong,” she said.

But others are in complete sympathy with M. 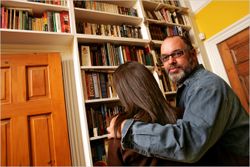 “How dare they question our beliefs and our Jewishness?” David Lightman, an observant Jewish father whose daughter was also denied a place at the school because it did not recognize her mother’s conversion, told reporters recently. “I find it offensive and very upsetting.”

“JFS is a state-funded school where my grandfather taught, and it’s selecting applicants on the basis of religious politics,” he said in an interview. “The Orthodox definition of Jewish excludes 40 percent of the Jewish community in this country.”

In view of the recent Court of Appeal ruling, JFS will no longer be able to give priority according to Jewish status.  Instead, the School will give priority to those who meet a religious practice test based on guidelines from the Chief Rabbi.  The basis of that test has now been agreed with the Schools Adjudicator. Those applicants wishing to be considered as priority applicants for available places will need to obtain a certificate establishing religious practice, based on the child's synagogue attendance, Jewish education and/or family communal activity.  This includes siblings and external applicants for Sixth Form places.  The form of that certificate can be seen by clicking here.  It will be seen that only synagogue attendance as from 1 September 2009 will be relevant.  Applicants are strongly advised to contact a synagogue as soon as possible to establish what they need to do to be able to demonstrate attendance and get the certificate signed.

Who Is a Jew? Court Ruling in Britain Raises Question

“This is potentially the biggest case in the British Jewish community’s modern history.”
Failed messiah was established and run in 2004 by Mr. Shmarya (Scott)Rosenberg. The site was acquired by Diversified Holdings, Feb 2016.