2 Jerusalem residents suspected of kidney trafficking
Sami Shem-Tov and Dmitry Orenstein allegedly made tens of thousands of dollars for each time they mediated between organ seller, buyer. Police know of at least 10 Israelis who agreed to donate kidney due to financial difficulties
Efrat Weiss • Ynet

Two Jerusalem residents have been arrested on suspicion of organ trafficking in an affair cleared for publication on Thursday. The police know of at least 10 Israelis who agreed to donate a kidney, most of them due to financial difficulties.

Jerusalem Police investigators waited for the two suspects, Sami Shem-Tov and Dmitry Orenstein, at the Hadassah Ein Kerem Hospital in Jerusalem on Sunday. They are believed to have arrived there to perform a tissue analysis on two other people.

Each such surgery would cost about $200,000. The operation would be performed abroad, mostly in South America or China.

For each such mediation, Shem-Tov and Orenstein were said to have received tens of thousands of dollars. The people who sold their kidney received only a small part of this sum. The police are now checking how many such deals took place and how long the activity lasted. 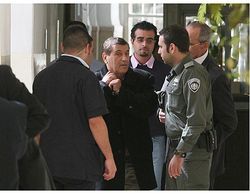 A day after their arrest, the two suspects were brought to the Jerusalem Magistrate's Court, where their remand was extended. Orenstein was placed under house arrest on Wednesday.

According to the organ transplant law, organ trafficking and selling is forbidden. The law went into effect last year and since then the act is considered a criminal offense.

Superintendent Gilad Behat, head of the Jerusalem Police's fraud division, said that 10 people seeking to sell their kidney have been questioned so far. "There may have been additional deals which were implemented," he added.

At this stage, the Hadassah Ein Kerem Hospital is not believed to be linked to the affair, although the two suspects were arrested on its premises.

Pair targeted Russian community.
Failed messiah was established and run in 2004 by Mr. Shmarya (Scott)Rosenberg. The site was acquired by Diversified Holdings, Feb 2016.