The protesters marched from Paris Square to Zion Square in the Jerusalem city center under the banner: "Iran is here – we're sick of haredi violence."

Thousands of secular and religious Jerusalemites and out-of-towners rallied in the capital Saturday to protest ultra-Orthodox violence and coercion.

The protesters marched from Paris Square to Zion Square in the Jerusalem city center under the banner: "Iran is here – we're sick of haredi violence."

Haredi rioters should be detained and indicted, Knesset Member Nitzan Horowitz (Meretz) said during the protest.

"One time it's a parking lot, another time it's Intel, and in another case it's the Pride Parade," he said. "These are merely excuses for shows of force, violence, and coercion."

"I would love to raise my two small children in a city where they would have the legitimacy to do whatever their faith commands them," Yehonatan Alazar, a religious local, told Ynet.

"It's unheard of that a small group will dictate everyone's actions and cause them to leave town. What bothers me about the struggle against Intel is that (haredim) are forcing others to desecrate the Shabbat, just as they do themselves. Their interest is not the Shabbat, but rather, the power struggle in Jerusalem," he said. 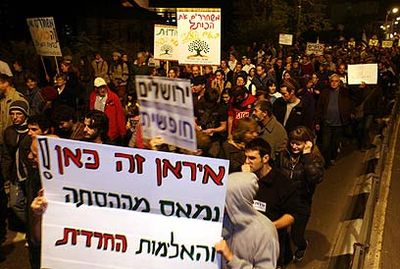 "We are facing a danger that threatens not only Jerusalem, but Israeli society at large. People gathered here from across the country because they realized this danger can reach them too, and they want to put an end to religious coercion," said Merav Cohen from the Awakening In Jerusalem movement.

"It's nice to see so many people care about this city and are willing to fight for Jerusalem's freedom," she added. 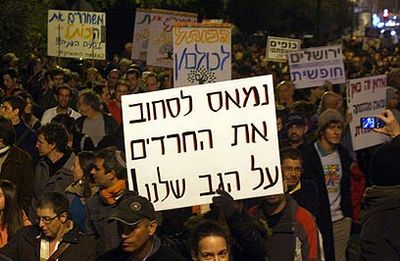 Avital Livni, which held a sign that read "Enough carrying haredim on our backs" said, "we live in a country where a whole sector of society refuses to serve in the military...extorts money from the government and doesn't pay their taxes.

"It doesn't make sense that Torah students receive tuition while med students have to pay for their studies, and then they have the nerve to force their rules upon the rest of the nation," she said.

"This protest proves that the battle for Jerusalem is not lost. Just like we were the victors in the battle to open the cinemas and Karta parking lot on Shabbat, we will win the Intel battle as well," said Jerusalem's deputy mayor Joseph "Pepe" Alalu.

"The residents of Jerusalem are not indifferent, and will not give up on a pluralistic city. It's time haredim understand that this city must provide the needs of the free people," he said.

This is a similar scam to the US-based haredi federal lunch program scam. In the US fraud, yeshivot and seminaries serve hot lunch one or two times per year – the days the state comes to inspect. The rest of the days, no lunch is served. The yeshivot and seminaries doing this collects tens of thousands of dollars each in subsidies for lunches never provided.

And that is only one out of many different haredi frauds run with near impunity in Brooklyn.

The protesters marched from Paris Square to Zion Square in the Jerusalem city center under the banner: "Iran is here – we're sick of haredi violence."
Failed messiah was established and run in 2004 by Mr. Shmarya (Scott)Rosenberg. The site was acquired by Diversified Holdings, Feb 2016.