Rabbi Saul J. Kassin, charged with money laundering in this summer’s epic federal sting, is the leader of the nation’s Syrian Jews. He has met with presidents, presided over countless weddings and hails from a rabbinical line dating to 15th-century Spain.

The Syrian rabbi's shocked flock
By Joe Ryan • The Star-Ledger

In the sweltering July rain, a white-bearded rabbi emerged from the federal courthouse in Newark and shuffled through a gantlet of news cameras. 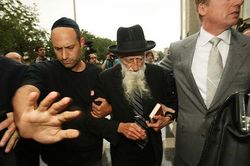 Saul J. Kassin, charged with money laundering in this summer’s epic federal sting, is the 88-year-old leader of the nation’s largest Syrian Sephardic Jewish congregation. He has met with presidents, presided over countless weddings and hails from a rabbinical line dating to 15th-century Spain. His father, Jacob S. Kassin, was for generations the spiritual leader of all Syrian Jews in Brooklyn.

Earlier this month, the rabbi’s lawyer allowed The Star-Ledger to view a sampling of the hundreds of letters supporters have written on Kassin’s behalf, lending new insight into a man prosecutors say conspired to use his religious charity to hide criminal proceeds.

The letters, some hand-written in Hebrew, describe the rabbi neither as a dynamic leader nor gifted orator, but rather as a soft-spoken cleric with a gentle handshake who walks to his Brooklyn synagogue, Shaare Zion, each morning before dawn. They tell of him dancing at weddings, visiting the sick, tending a vegetable garden and intervening in family and neighborly disputes.

"When this story broke it was like, ‘What? Rabbi Kassin?’ This whole thing was just a huge shock to people who knew him," Dov Hikind, a New York state assemblyman from Brooklyn, said in an interview.

Four months have passed since Kassin and scores of others were charged in the sting, through the aid of a Syrian rabbi’s son who began wearing a wire for the FBI after being charged with bank fraud. Seven of those defendants have pleaded guilty to corruption charges. But there have been no public developments on the money-laundering end of the investigation.
The charges against Kassin stem from his massive charity, Magen Israel Society, which he runs from the dimly lit dining room of his modest brick and stucco house.

In his most recent filing with the Internal Revenue Service, the rabbi claimed raising nearly $26 million between 2004 and 2008. His lawyer, Gerald L. Shargel, said most of that money went toward educational grants, often to Israel. But the attorney said he was unable to name specific recipients. Kassin, who kept records by hand, is the only officer listed for Magen Israel with the IRS. His accountant, Charles R. Harary, declined to be interviewed but defended the rabbi in a brief written statement.

"I believe that every penny or dollar that was ever contributed was given out to hospitals, families, synagogues," Harary wrote.

Prosecutors say some of those contributions to Magen Israel did not go to charity. They accuse Kassin of laundering $200,000 for the informant, Solomon Dwek, in exchange for a 10 percent cut for Magen Israel.

"Kassin is the best," Rabbi Edmund Nahum allegedly told Dwek as he described their purported money-laundering network, according to a criminal complaint filed in federal court in Newark. Nahum has also been charged.

"Rabbi Kassin’s charitable endeavors have been well known for decades," said Shargel. In the letters and in interviews, the rabbi’s supporters emphatically insisted he would never consciously break the law. Some described him as naive and, perhaps, gullible. Others said he must have been tricked.

"He could never imagine that someone would set him up like this," said Sarina Roffé, a journalist and genealogist who has researched the Kassin family. "He is very trusting. ... He would never intentionally have done something wrong."

With more than 75,000 people, Brooklyn’s Syrian Jewish community is based along Ocean Parkway, in a neighborhood where merchants sell spiced olives from buckets and the smell of fresh pita wafts from Middle Eastern bakeries. Every summer, families from Brooklyn migrate by the thousands to the Monmouth County borough of Deal, where a smaller Syrian community has burgeoned among the sprawling oceanfront homes.

The families tend to be large and tight-knit; it’s not uncommon for three generations of relatives to live within walking distance. That family cohesiveness stems, in part, from a 1935 edict issued by Kassin’s father and four other rabbis that bans marrying non-Jews and, with a few exceptions, converts. The punishment is exile. Even one of Saul Kassin’s eight children, Anna Kassin, was banished after marrying a gentile; she lives now in California and declined to comment.

None of Kassin’s relatives and few of his supporters agreed to interviews. Members of the Syrian Jewish community have long had a reputation of being reluctant to talk to reporters.
Kassin, who is free on $200,000 bail while he awaits trial, remains a familiar presence on the streets of Brooklyn, walking each morning in his black felt hat and foot-long beard blowing in the wind.

The rabbi’s supporters, who include politicians in both New York and Israel, describe him as a simple and thrifty man, who stubbornly refuses to throw away old lamps and broken chairs. His house is so cramped, they say, that for holiday meals the family removes all the living room furniture to make room for guests.

THE RABBIS OF ALEPPO

Like most Sephardic Jews, the Kassin family traces its history to Spain; Ashkenazi Jews, on the other hand, hail from France, Germany and Eastern Europe. After being expelled in 1492, many of the Sephardi fled to North Africa, Italy and the Middle East. In 1540, a wealthy Spanish merchant named Shlomo Kassin arrived in Aleppo, Syria, where he became head of the Jewish community, according to Roffé, the genealogist. Shlomo Kassin’s grandson, Yomtob Kassin, became the head of the city’s rabbinical court.

For the next several centuries, scores of Kassins were rabbis in Aleppo and what is now Israel. Saul Kassin was born in 1921 in Jerusalem. Twelve years later, his father was invited to lead the congregation in New York.

After becoming a rabbi, Saul Kassin taught at a Brooklyn yeshiva, wrote books in both English and Hebrew and worked as his father’s chief assistant. Before dying in 1994, Jacob Kassin named his son as his successor.

Kassin’s title as chief rabbi is largely honorary; he is not the final word on religious matters. As head of the local rabbinical council, he has authority to call meetings and set agendas in consultation with other rabbis. But his vote carries no more weight than the others, one member of the council said.

Prosecutors turned to Kassin as early as June 2007 after Dwek, the informant, asked Nahum to help him hide $10,000 from his bankruptcy proceedings, authorities said. Nahum allegedly agreed. He sent Dwek’s check to Kassin, who kept 10 percent and sent another check for the remaining $9,000 back to Nahum, authorities said.

Nahum said he and Kassin regularly moved checks "back and forth" as a way of hiding money, according to authorities. Between June 2007 and December 2008, Dwek met with Kassin five times and laundered $200,000 through Magen Israel, saying — among other things — he wanted to hide profits from a knockoff handbag business he ran, authorities said.

Eight months later, federal authorities fanned out across New Jersey and Brooklyn and arrested scores of defendants tripped up by Dwek. Kassin, however, was allowed to surrender.
After appearing before a federal magistrate judge, he walked out into the rain to face the gantlet of cameras.

Rabbi Saul J. Kassin, charged with money laundering in this summer’s epic federal sting, is the leader of the nation’s Syrian Jews. He has met with presidents, presided over countless weddings and hails from a rabbinical line dating to 15th-century Spain.
Failed messiah was established and run in 2004 by Mr. Shmarya (Scott)Rosenberg. The site was acquired by Diversified Holdings, Feb 2016.