The Man Who Smuggled Himself Into Auschwitz 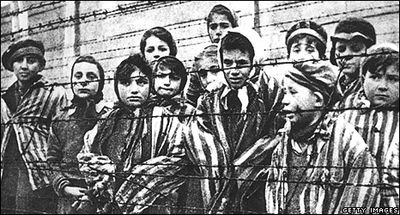 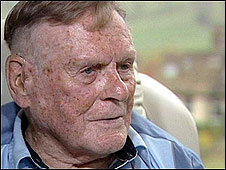 Denis Avey is a remarkable man by any measure. A courageous and determined soldier in the World War II, he was captured by the Germans and imprisoned in a camp connected to the German's largest concentration camp, Auschwitz.

But his actions while in the camp - which he has never spoken about until now - are truly extraordinary. When millions would have done anything to get out, Mr Avey repeatedly smuggled himself into the camp.

Auschwitz was hell on earth

Now 91 and living in Derbyshire, he says he wanted to witness what was going on inside and find out the truth about the gas chambers, so he could tell others. He knows he took "a hell of a chance".

"When you think about it in today's environment it is ludicrous, absolutely ludicrous," he says.

"You wouldn't think anyone would think or do that, but that is how I was. I had red hair and a temperament to match. Nothing would stop me."

He arranged to swap for one night at a time with a Jewish inmate he had come to trust. He exchanged his uniform for the filthy, stripy garments the man had to wear. For the Auschwitz inmate it meant valuable food and rest in the British camp, while for Denis it was a chance to gather facts on the inside.

He describes Auschwitz as "hell on earth" and says he would lay awake at night listening to the ramblings and screams of prisoners.

"It was pretty ghastly at night, you got this terrible stench," he says.

He talked to Jewish prisoners but says they rarely spoke of their previous life, instead they were focused on the hell they were living and the work they were forced to do in factories outside the camp.

"There were nearly three million human beings worked to death in different factories," says Mr Avey. "They knew at that rate they'd last about five months.

"They very seldom talk about their civil life. They only talked about the situation, the punishments they were getting, the work they were made to do."

He says he would ask where people he'd met previously had gone and he would be told they'd "gone up the chimney".

"It was so impersonal. Auschwitz was evil, everything about it was wrong."

He also witnessed the brutality meted out to the prisoners, saying people were shot daily. He was determined to help, especially when he met Jewish prisoner Ernst Lobethall.

Mr Lobethall told him he had a sister Susana who had escaped to England as a child, on the eve of war. Back in his own camp, Mr Avey contacted her via a coded letter to his mother.
He arranged for cigarettes, chocolate and a letter from Susana to be sent to him and smuggled them to his friend. Cigarettes were more valuable than gold in the camp and he hoped he would be able to trade them for favours to ease his plight - and he was right.

Auschwitz prisoner's sister meets man who helped save him

Mr Lobethall traded two packs of Players cigarettes in return for getting his shoes resoled. It helped save his life when thousands perished or were murdered on the notorious death marches out of the camps in winter in 1945.

Mr Avey briefly met Susana Lobethall in 1945, when he came home from the war. He was fresh from the camp and was traumatised by what he'd witnessed and endured.

At the time both of them thought Ernst was dead. He'd actually survived, thanks - in part - to the smuggled cigarettes. But she lost touch with Mr Avey and was never able to tell him the good news.

The BBC has now reunited the pair after tracing Susana, who is now Susana Timms and lives in the Midlands. Mr Avey was told his friend moved to America after the war, where he had children and lived a long and happy life. The old soldier says the news is "bloody marvellous".

Sadly, the emotional reunion came too late for Ernst - later Ernie - who died never even knowing the real name of the soldier who he says helped him survive Auschwitz.

But before he died Mr Lobethall recorded his survival story on video for the Shoah Foundation, which video the testimonies of Holocaust survivors and witnesses. In it he spoke of his friendship with a British soldier in Auschwitz who he simply called "Ginger". It was Denis.

Ernest Lobethall moved to the US

He also recalled how the cigarettes, chocolate and a letter from his sister in England, were smuggled to him in the midst of war.

"It was like being given the Rockefeller Centre," he says in the video.

Mr Avey traded places twice and slept overnight in Auschwitz. He tried a third time but he was almost caught and the plan was aborted.

He suffered from Post Traumatic Stress Disorder when he came back from the war and has only recently been able to speak about what he did and what he saw.

He admits some may find it hard to believe and acknowledges it was "foolhardy".

"But that is how I was," he simply says.

The Man Who Smuggled Himself Into Auschwitz