The Case For Immigration Reform

Immigration will save America's small towns–like Postville– and its rural heartland from economic ruin. 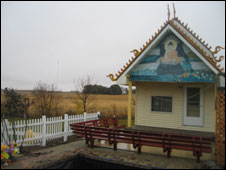 Look around America's rural heartland in the 21st Century and you see some remarkable things.

Newly arrived Somali workers, tucking into burritos in a Mexican restaurant in the middle of nowhere.

Ultra-orthodox Jews hurrying through the chilly autumn gloom to Sabbath prayers in a small town set amid rolling hills.

A Laotian refugee in neat uniform, helping the local police to navigate the cultural and linguistic fault lines separating her community from other officers.

And classrooms in remote high schools that echo to the sounds of languages and dialects from every continent on earth.

Such scenes might be commonplace elsewhere in this country of immigrants, but 20 years ago they were unthinkable here in the Midwest, where diversity used to mean whether your 19th Century antecedents were German or Scandinavian.

Immigration - legal and illegal - is having a startling impact. Its consequences can be hard to predict.

Storm Lake has its own Buddhist temple

Take Storm Lake, a town of 20,000 in north-western Iowa. A trickle of refugees arrived from south-east Asia in the 1980s, but more recent waves from Latin America, from Africa and deprived regions of urban America have transformed the community.

The numbers reflect a community where the local economy holds fewer attractions for middle-class Americans and where immigrants are drawn in to fill the gaps.

Demographic maps of America show a great hollowing out of the middle, across the Great Plains and the Midwest. In some areas, almost every county has experienced significant net emigration during the past 20 years. 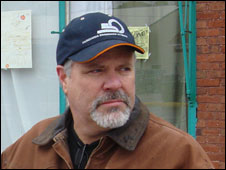 Mark Grey, a professor of anthropology at the University of Northern Iowa, says three kinds of community remain:

• larger urban areas, connected to the global economy
• rural counties that are slowly dying, with shrinking and ageing populations, and
• places like Storm Lake that are bucking the trend of rural depopulation, thanks entirely to immigration

"The problem is, it takes a while to make it work," he says. "People look for overnight solutions and we tell them, over and over again, there isn't one."

In Storm Lake, home to two of the nation's largest meatpacking plants, the solutions seem to be working.

The school system has adapted, the town's imaginative police chief has recruited community support officers from key immigrant groups, and the town has generally prospered.

This does not mean Storm Lake is integrated - the various communities tend to keep to themselves - but there is a modus vivendi that has generated praise and attention nationwide.

Storm Lake's conservative-minded indigenous population has looked on with a mixture of apprehension and cautious optimism.

"If we weren't growing, we'd be going the other way. We'd be withering," says Eloise Pritchard who, with her husband Jim, regularly samples the home cooking at the Pantry on Lake Avenue.

"But we don't need the criminal element from Chicago and Mexico. You don't want to be overrun."

A couple of hundred miles east across the endless cornfields is a town with a different, more tragic story. Postville, Iowa, a town of just 2,000 people, is on its knees.

It all began promisingly enough, if a little uniquely.

After a kosher meat processing plant opened here in 1987, Postville underwent sudden and dramatic change. Ultra-orthodox rabbis and their families quickly established their own community.

Soon, immigrants - many of them illegal - arrived to work at the plant. They came from far and wide, including Mexico, Guatemala, Ukraine, Israel and Somalia.

For more than 15 years, the town celebrated its newfound diversity. It held an annual Taste of Postville food festival, and its school kept track of the languages that came and went over time - 37 at the last count.

But in May last year, it all came crashing down as heavily-armed federal agents swooped on the town and arrested almost 400 illegal immigrants working at the kosher plant.

Overnight, a third of the town's adult population disappeared.

Eighteen months after the raid, a handful of Mexican and Guatemalan women are still obliged to wear bulky GPS tracking devices around their ankles. They are unable to work or to leave, since they are regarded as material witnesses in the ongoing legal proceedings.

They are frequent visitors to the Postville Resource Centre, where Maryn Olson dispenses advice against walls plastered with news clippings documenting the town's travails.

"I need a bus ticket out of town. I'm being evicted. Help, my child needs to go to the doctor. I need quarters to do laundry. You name it, we got the question," says Ms Olson.

Townspeople do not know who to blame most - the Hassidic company that ran the meat processing plant, the federal authorities for picking on their vulnerable town, or the immigrants themselves.

Father Paul Ouderkirk, a recently retired Catholic priest at the centre of efforts to manage the fallout, says the whole affair undid years of painstaking effort.

Postville's immigrant population has been left in disarray

"It destroyed all the work of diversity that had been going on for 15 years."

One thing many agree on is that their town's acute difficulties underline the need for the government in Washington to do something about immigration policy.

"Postville has suffered very, very deeply from the lack of immigration reform," says Mark Grey, who has co-authored a book, Postville USA, which charts the town's complex story.

"The ways that our immigration policies have been… imposed on places like Postville have frankly been devastating."

But Mr Grey recognises that reform is not just around the corner. President Obama's domestic agenda is crowded enough already, and with mid-term elections just a year away, immigration is a toxic, politically dangerous issue.

"Obama has sent a lot of signals that he wants to lay the groundwork, but… it's going to be a tough sell," says Mr Grey.

Posted at 11:32 AM in Kosher Scandal | Permalink

The Case For Immigration Reform

Immigration will save America's small towns–like Postville– and its rural heartland from economic ruin.
Failed messiah was established and run in 2004 by Mr. Shmarya (Scott)Rosenberg. The site was acquired by Diversified Holdings, Feb 2016.