« Department of Circular Reasoning: Haredim Blame Secular Mayor For "Incitement" Against Haredim | Main | Agudah Head: We Can No Longer Pretend Child Sexual Abuse Does Not Exist »

If the Vilna Gaon was right, on March 16, 2010, construction will begin on the third Temple. That day coincides with the third completion of the Hurva Synagogue in Jerusalem's Jewish Quarter.

If the Vilna Gaon was right, the 3rd Temple is on its way
By Nir Hasson • Ha'aretz

If the 18th-century rabbinic authority the Vilna Gaon was right, on March 16, 2010, construction will begin on the third Temple. His projection states that the auspicious day will coincide with the third completion of the Hurva Synagogue in Jerusalem's Jewish Quarter. 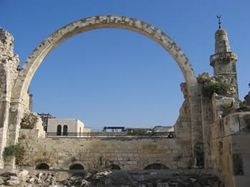 The great day is at hand: On March 15, the reconstructed Hurva Synagogue, considered the most important house of prayer in Jerusalem will be rededicated. It was last destroyed in the War of Independence.

However, during the reconstruction process, the Hurva has become a bone of contention between ultra-Orthodox and other Jerusalemites.

The conflict is over what kind of institution the Hurva will be. A group of secular and national-religious Jerusalemites say that if the state does not act quickly, the Hurva will become another ultra-Orthodox synagogue, where women and tourists are unwelcome.

"The government has invested millions in the restoration of the synagogue. It is a place of special value to tourists. The Jewish Quarter has dozens of synagogues and it doesn't need another one," said Tehila Nahlon, an activist. 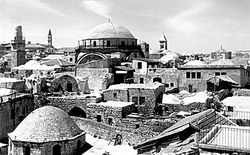 The debate reflects wider issues of identity facing the Jewish Quarter, which has become increasingly ultra-Orthodox in recent years.

City councilwoman Rachel Azariya said, "The Hurva must not become just another synagogue, and the Jewish Quarter just another Haredi neighborhood."

The Hurva, whose name means "ruin," was initially built by disciples of Rabbi Judah Hahasid in the early 18th century. It was destroyed shortly thereafter by Muslims demanding the return of loans given to build the synagogue. After it was rebuilt in the mid-19th century, it became the most important synagogue in the country, but it was blown up in 1948 by the Jordan Legion a few days before the fall of the Jewish Quarter in the War of Independence.

In 2001, after years of debate, the government decided to restore the building.

The historic building, whose famous dome one more dominates the skyline of the Jewish Quarter, has now been meticulously recreated, including furnishings and wall frescoes.

However, secular and Zionist Orthodox Jerusalemites are concerned that two developments could lead to the synagogue becoming ultra-Orthodox.

The first was the appointment of a rabbi for the synagogue - which happened about three years ago, when it was still a concrete shell - Rehovot's chief rabbi Simcha Hacohen Kook, who is considered close to the ultra-Orthodox non-Hassidic leader Rabbi Yosef Elyashiv. He was chosen by a panel of rabbis, with the blessing of Sephardic Chief Rabbi Shlomo Amar. 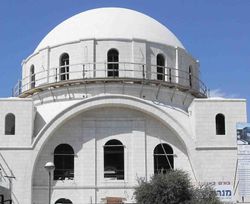 "A government company built the synagogue. There are procedures for how people are chosen. They made this choice to prevent the appointment of a Zionist Orthodox rabbi," said Anat Mufkadi, a member of the group concerned about the synagogue. Rabbi Elyashiv reportedly told Haredi journalist Shlomo Kook, the synagogue rabbi's nephew, that the expedited appointment was intended to "stop up gaps," comments understood to mean keeping a Zionist Orthodox rabbi from getting the post.

The CEO of the Jewish Quarter Development Company, which built the syangogue, Nissim Arazi, who said he was surprised by the rabbi's appointment, refused to attend his investiture ceremony three years ago. "It's not clear to me why a rabbi is necessary when there isn't even a synagogue and we don't know who the congregation will be," he told Haaretz a few days ago. However, Arazi said he believes Kook is a worthy candidate.

The activists say the reconstructed synagogue should present the historical saga of the Jewish Quarter, display archaeological finds unearthed there, and be fully accessible to tourists, men and women together. The group wants to prevent a round-the-clock kollel (yeshiva for married men) from opening there, which would preclude any other activity.

However, for the ultra-Orthodox, the matter is unequivocal: "The question is whether this will be a synagogue and a house of study, or a display of all sorts of foolishness," the Jewish Quarter's rabbi Avigdor Nebenzahl said on an ultra-Orthodox Web site.

The journalist, Kook, said: "My uncle is close to all communities, he is not a classic Haredi or a fanatic. He doesn't expect the site to become a Haredi synagogue with 50 prayers a day. He understands that it's a different synagogue. But it's important to him that it be more a synagogue than a museum."

Posted at 02:10 AM in Haredim, Israel, Turf Disputes | Permalink

If the Vilna Gaon was right, on March 16, 2010, construction will begin on the third Temple. That day coincides with the third completion of the Hurva Synagogue in Jerusalem's Jewish Quarter.
Failed messiah was established and run in 2004 by Mr. Shmarya (Scott)Rosenberg. The site was acquired by Diversified Holdings, Feb 2016.