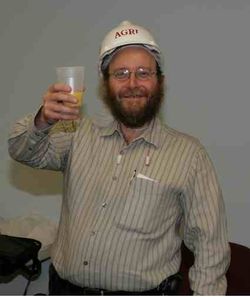 SIOUX FALLS, S.D., (AP) — A former Iowa kosher slaughterhouse manager accused of defrauding a bank was incompetent and in over his head, a plant employee testified Monday.

Abrahams, who still works at the Postville, Iowa, plant, also testified that understaffing led to sloppiness in the plant's operation.

Rubashkin is charged with 91 counts of financial fraud. His attorneys argue the alleged fraud at the former Agriprocessors Inc. plant was the result of incompetence, not corruption.

The defense began its case after the prosecution rested Monday morning.

Abrahams said Rubashkin and his brother Heshy had frequent screaming matches about the plant.

"Unfortunately, in front of many of us, there was constant fighting," Abrahams said. "You would rarely see half a minute pass before you'd hear shouting. It was painful to watch."

He said Sholom Rubashkin "was always screaming and making people crazy and trying to get them to stop spending money, to look for ways to save money."

Agriprocessors was the site of an immigration raid in May 2008 in which 389 illegal workers were arrested. The raid gutted one-third of the plant's work force and forced it into bankruptcy.

The plant was bought by a Canadian businessman and reopened under the name Agri Star.

The defense also called Bill Heter, a farmer who testified that he had a strong relationship with Rubashkin and sold the plant 7,000 head of cattle without any problems.

Abraham Roth, an accountant and Rubashkin family friend, testified that St. Louis-based First Bank Business Capital likely knew about illegal activities at the plant and looked the other way because its loan arrangement with Rubashkin was profitable.

The bank issued a $35 million line of credit to the plant to keep it afloat. Bank officials allege that Rubashkin denied knowing about illegal workers and inflated sales invoices to collect more money.
"It was impossible for (the bank's) auditor to miss this," Roth said. "I'm convinced they saw it, but it wasn't important to the bank."

Information from: The Des Moines Register.

Witness: Rubashkins in 'over their head'
By GRANT SCHULTE • Waterloo-Cedar Falls Courier

SIOUX FALLS, S.D. – Sholom Rubashkin was an incompetent manager who tackled too much and fell into constant screaming matches with his brother about their eastern Iowa meat plant, a former co-worker testified today.

Chaim Abrahams, a purchasing manager at Agriprocessors Inc., told jurors that chronic under-staffing led to sloppiness in the kosher plant's day-to-day operations. Rubashkin juggled five to seven tasks at a time and was difficult to reach unless dire problems arose, Abrahams said.
At the same time, a "major disconnect" between Rubashkin and his brother Heshy led to screaming matches and poor communication, he said. Abrahams described Sholom Rubashkin, Heshy, and their father Aaron as "a bunch of amateurs who were in over their head."

He said he was uncomfortable sharing his assessment in public, but was pressed by defense lawyer F. Montgomery Brown. Rubashkin's legal team argues that alleged fraud at the plant was caused by incompetence and poor record keeping, instead of corruption.
Abrahams was the third defense witness to testify today in Rubashkin's 91-count financial fraud trial in South Dakota. Prosecutors rested their case this morning after calling nearly 50 witnesses.

Brown asked Abrahams whether Sholom Rubashkin got along with his brother.

"Unfortunately, in front of many of us, there was constant fighting," Abrahams said. "You would rarely see half a minute pass before you'd hear shouting. It was painful to watch."

Sholom Rubashkin, he said, "was always screaming and making people crazy and trying to get them to stop spending money, to look for ways to save money."

Heshy, by contrast, pushed aggressively to expand the plant, Abrahams said. Plant managers added an "oven bake" line three times larger than what was originally projected because they assumed it would be successful, Abrahams said.

Abrahams still works at the plant, now renamed and under new management, with Heshy Rubashkin. He said he is still friends with Heshy and had remained close to Sholom "until 7 to 8 months ago, when I was told not to talk to him."

Rubashkin has pleaded not guilty to mail, bank and wire fraud charges, money laundering and ignoring a federal order to pay livestock providers in the 24 hours required by law.

Agriprocessors Inc. was the site of May 2008 raid that caught 389 illegal workers. The operation, among the largest in American history, gutted one-third of the plant's workforce and forced it into Chapter 11 bankruptcy. A Canadian businessman has since re-opened the slaughterhouse and renamed it Agri Star.

Defense lawyers also called Bill Heter, a Greene County farmer, who told jurors that he had a strong business relationship with Rubashkin and sold the plant 7,000 heads of cattle without any problems. Prosecutors noted that Heter had not spoken with other farmers about their experiences.

Abraham Roth, a Brooklyn accountant and Rubashkin family friend, testified that First Bank Business Capital, the plant's St. Louis-based lender, probably knew about illegal activities at the slaughterhouse but looked the other way because their loan arrangement was profitable.
At issue is a $35 million credit line the bank extended to the plant to keep the operation afloat. Bank officials have said Rubashkin denied any knowledge about illegal immigrants at the plant and deliberately inflated sales invoices so he could collect more money.

Defense lawyers counter that bank officials knew about the activity but didn't care. Plant managers paid interest to the bank on schedule, and First Bank received at least $13.5 million in interest before production at Agriprocessors collapsed.

"It was impossible for (the bank's) auditor to miss this," Roth said. " . . . The information was so obvious, so openly presented, that the auditor should have seen it the first time around. I'm convinced they saw it, but it wasn't important to the bank."