Rubashkins, Knowing Raid Was Imminent, Tried To A Cut Deal 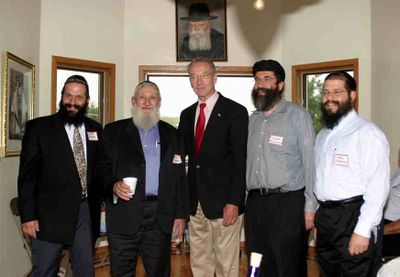 Sholom, Aaron, Yossie and Heshy Rubashkin with US Senator Charles Grassley in Sholom's home during a Grassley Campaign fundraising event.
As you read this, remember the Social Security Administration had repeatedly warned Agriprocessors about employee Social Security numbers which did not match government records.
Agriprocessors ignored those warnings.
Then, after the government had already mobilized hundreds of law enforcement personnel in preparation for a raid, the company suddenly tried to cut a deal.
The company attorney in Washington (DC) mentioned should be Nathan Lewin.
Chaim Abrahams is listed in court documents as Sholom Rubashkin's brother-in-law: Sioux Falls, S.D. — Top executives of an eastern Iowa slaughterhouse knew they were about to be raided by immigration agents and offered to cooperate with the government several days before the bust, a plant manager testified Monday.

Chaim Abrahams, a purchasing manager at Agriprocessors Inc., told federal jurors about a May 8 meeting at the Postville plant that included Sholom Rubashkin, his brother and other high-ranking employees. Company lawyers from Chicago and Washington participated by phone.

"We sent the government a letter prior to the raid that we would do anything necessary to avoid a disruption," Abrahams testified.

Managers knew an immigration raid "was very likely" the following week, Abrahams said, but they incorrectly believed it would take place on May 13, 2008.

Federal agents entered the plant on May 12, 2008, in what was then the largest single-site workplace crackdown in U.S. history. U.S. Immigration and Customs Enforcement detained 389 workers - about one-third of the work force - and combed the plant for incriminating papers.

Abraham described Rubashkin as an incompetent manager who tackled too much and fell into constant screaming matches with his brother, Heshy.

Later, on cross-examination by Assistant U.S. Attorney Matt Cole, Abrahams acknowledged that Rubashkin was a smart man who handled all of the plant's finances.

Abrahams told jurors that chronic worker shortages led to sloppiness in the plant's day-to-day operations. Rubashkin juggled five to seven tasks at a time and was difficult to reach unless dire problems arose, Abrahams said.

At the same time, a "major disconnect" between Rubashkin and Heshy led to screaming matches and poor communication, he said. Abrahams said he was uncomfortable sharing his assessment in public, but was pressed by defense lawyer F. Montgomery Brown.

Rubashkin's legal team argues that alleged fraud at the plant was caused by incompetence and poor record-keeping, instead of corruption.

Abrahams still works at the plant, now renamed and under new management, with Heshy Rubashkin.

Rubashkins, Knowing Raid Was Imminent, Tried To A Cut Deal

After plant had ignored several warnings from Feds, Rubashkin legal team tried to cut deal to avoid "disruption."
Failed messiah was established and run in 2004 by Mr. Shmarya (Scott)Rosenberg. The site was acquired by Diversified Holdings, Feb 2016.