“I made mistakes. I’m a human being. I took the information people gave me and sort of went with it without really drilling down to see if it was for real or not.” 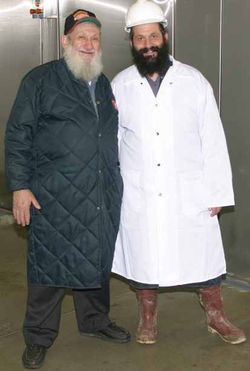 Sioux Falls, S.D. – Sholom Mordechai Rubashkin insisted today that he never intentionally violated federal fraud or immigration laws as the head of an eastern Iowa kosher meat plant, but acknowledged that he “made mistakes.”

The former top executive at Agriprocessors Inc. attributed his plant’s questionable financial practices to his own oversights or actions by other employees. He said he was “trying hard to comply with the law” at the plant, but he grew visibly annoyed when grilled by a federal prosecutor.

“I made mistakes,” he said. “I’m a human being. I took the information people gave me and sort of went with it without really drilling down to see if it was for real or not.”

Rubashkin’s statements came during his 91-count financial-fraud trial in Sioux Falls, S.D. The 50-year-old has pleaded not guilty to charges of bank-, mail-, and wire-fraud, money-laundering and ignoring an order to pay cattle providers in the time mandated by law.

The trial comes more than a year after federal agents raided the Postville slaughterhouse and detained 389 illegal immigrants. The plant slipped into bankruptcy, and prosecutors say further investigation by a court-appointed trustee unearthed evidence of a massive fraud scheme.

Rubashkin told jurors he never read the agreement for a $35 million credit line to the plant, which he signed.

Assistant U.S. Attorney C.J. Williams confronted him about a statement he allegedly made to Elizabeth Billmeyer, the plant’s human resources director. Billmeyer testified last week that she warned Rubashkin about illegal immigrants working the plant. She said Rubashkin told her: “It’s my company, and I’ll run it the way I want.”
“Did you say that?” Williams asked.

On the stand, Rubashkin shook his head and said he was offended.
“First of all, Agriprocessors is not my company,” he said. “I don’t talk like that. I never, ever made a statement like that. It’s not me.”

Williams asked Rubashkin about $1.5 million in customer checks deposited to Citizens State Bank in eastern Iowa. Executives with First Bank Business Capital, the plant’s lender, testified last month that the money should have gone to a different bank in Decorah, which would then route the money to them.

Rubashkin frowned. “You’re not giving a clear picture to the jury,” he said.

Williams replied: “If your counsel wants to ask you a question, sir, he can do it. I need you to answer mine.”

Defense lawyer Guy Cook walked Rubashkin through his upbringing in the Crown Heights neighborhood in Brooklyn, then asked about his family and faith as a Hasidic Jew. Prosecutors objected to the narrative nine times in the first 25 minutes of testimony.

Rubashkin spoke in rapid-fire bursts, and veered off subject several times as attorneys grilled him. Williams at one point asked Rubashkin the same question four times.

Rubashkin also likened himself to a “pioneer of the West” who helped build a strong Chabad Lubavitch Jewish community his northeast Iowa town.
“In the beginning, it was quite a task to get one or two people to come there, and someone to teach,” he said.

“I made mistakes. I’m a human being. I took the information people gave me and sort of went with it without really drilling down to see if it was for real or not.”
Failed messiah was established and run in 2004 by Mr. Shmarya (Scott)Rosenberg. The site was acquired by Diversified Holdings, Feb 2016.