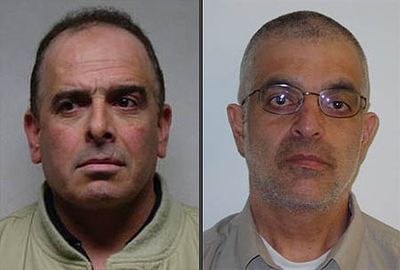 Left, Hosam Amara. Right, Zev Levi.
The Courier's Jens Manuel Krogstad's Twitter feed notes that the government told the judge today that Hosam Amara, former Agri supervisor on the lam in Israel, received $4,000 from Sholom Rubashkin who encouraged him to flee.
Amara called prosecutors in March hoping to cut a deal in exchange for that info.
Rubashkin told me the best thing I could do was go back to Israel, Amara allegedly said.
Amara managed to sneak into Israel without knowledge of Israeli authorities, last entering in Aug. 2009 via Jordan River border.
Amara also confirmed to government that Zev Levi, another Agriprocessors manager, is hiding in Israel.
Amara allegedly ran a used car scam that required undocumented workers to buy poor quality used cars from Amara at highly inflated prices in order to get hired by Agriprocessors.
FailedMessiah.com and the Iowa Independent both reported in 2008 that Amara was living in Israel.

Former Agriprocessors manager ran at Rubashkin's request. Is now hiding in Israel.
Failed messiah was established and run in 2004 by Mr. Shmarya (Scott)Rosenberg. The site was acquired by Diversified Holdings, Feb 2016.