"When you're in the ring after five rounds, going on 12, it's very spiritual, and I'm saying my own little prayers throughout the fight, 'Please, God, protect me.'"

Full of the fighting spirit: Brooklyn boxer contends he can be rabbi
BY JAKE PEARSON • New York Daily News 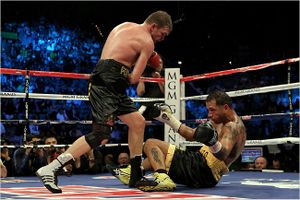 Now he wants to complete the other - becoming a rabbi.

While he hears criticism about his profession from some in Brooklyn's Jewish community, Foreman, 29, said, "People who have never been in the ring, never done what I do, they're sometimes really quick to give their opinions.

"They like to say what's forgiven and what's forbidden...but it's not so simple."

The 29-year-old Foreman, who lives in Carroll Gardens and trains in Gleason's Gym in DUMBO, has a record of 28-0. He's also been a part-time rabbinical student for the past three years, even though it is widely held that a rabbi shouldn't be a professional fighter.

"I don't think it's even a debate among rabbis," said Sid Leiman, a professor of Jewish history at Brooklyn College. "Rabbis would look unkindly on [boxing]; if it's not against Jewish law, it's certainly against the spirit of Jewish law."

Still, Foreman is not alone. Flatbush's Dmitriy Salita - who, like Foreman, also keeps kosher and will not fight on the Sabbath or on holidays - is a professional boxer and an Orthodox Jew, though not a rabbi-to-be.

But that doesn't matter to some.

"The wrong way of looking at this is to say, 'He's an observant Jew and he's boxing so it's okay,'" said Rabbi Yaakov Osdoba, 40, a seminary instructor in Crown Heights. "The point is, even though he's observant it doesn't justify [boxing]."

Foreman doesn't buy the criticism, saying portions of Halakhah, Jewish law, provide justification for the sport he not only loves, but one he feels brings him closer to God.

"Look, if you ask, just boxing, any rabbi who doesn't know boxing is going to give you an answer right away," he said.

"But when you're in the ring after five rounds, going on 12, it's very spiritual, and I'm saying my own little prayers throughout the fight, 'Please, God, protect me.'"

The 154-pound slugger is originally from Belarus. He emigrated to Israel when he was 7, where he won three national championships as a teenager.

He came to Carroll Gardens 10 years ago to train for a world championship and discovered religion as he found success in the ring, studying at Temple Iyyun on Union St.

On the way, he won a Daily News Golden Gloves title.

Foreman has a year left before being ordained, something he says will happen whether or not he has every Brooklyn rabbi's approval.

"Listen, I came from the Soviet Union, where religion was illegal," he said. "In America, you still have opportunities to be Jewish."

I looked into this twice, once when I first became Orthodox and then again more recently.

1. Learning self defense, including boxing, is okay.

2. Fighting in amateur bouts wearing head protection under strictly controlled conditions, or sparring under similar conditions, may be okay.

3. Sparing or fighting using professional rules is not okay.

4. Fighting without head protection is not okay.

The operative term here is safety.
We now know that even seemingly minor blows to the head can cause brain damage. (This is a problem for NFL players, especially linemen, as well as boxers.) As people live longer, that brain damage becomes much more apparent.
The punch drunk fighter (a good fictionalized example of this is Coach on Cheers, although his impairment came from being repeatedly beaned, not from boxing) is brain damaged.
What halakha would expect in order to permit participation in professional boxing is the risk of this damage to be quite low. But the risk is not low – the risk is quite high.
The reason Foreman and Salita can still fight and be Chabad rabbinical students is, I believe, related to how Matisyahu was able to stand on stage before non-Jewish audiences wearing a kapote and black hat and sing as revelers formed mosh pits and the like – whatever gets Chabad (or a particular corner of Chabad) good publicity becomes permitted, because the greater "good" of promoting Menachem Mendel Schneerson and fundraising trump the "minor" halakhas that prohibit or strongly discourage such behavior.
Foreman's response to halakha-based criticism, "when you're in the ring after five rounds, going on 12, it's very spiritual, and I'm saying my own little prayers throughout the fight, 'Please, God, protect me,'" displays an infantile understanding of theology and halakha.
As the gemara points out, a thief also prays. He asks God to protect him, to help him avoid capture, and to allow him to return safely to his home. But this act of prayer, as genuine as it surely is, does not make the crimes committed kosher.
And Foreman's heartfelt prayers do not make brain damage kosher, either.

Posted at 11:01 AM in Chabad, Halakha, Jews In Sports, Med-Ethics, Public Health | Permalink

"When you're in the ring after five rounds, going on 12, it's very spiritual, and I'm saying my own little prayers throughout the fight, 'Please, God, protect me.'"
Failed messiah was established and run in 2004 by Mr. Shmarya (Scott)Rosenberg. The site was acquired by Diversified Holdings, Feb 2016.