NY Soup Kitchens Will Be "Classy" – And Kosher

An upscale Midwood kosher restaurant that closed in May will soon reopen as a kosher soup kitchen, offering a fine dining experience, complete with waiter service. 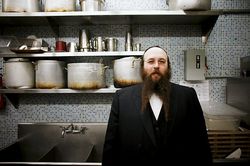 An upscale Midwood kosher restaurant that closed in May will soon reopen as a kosher soup kitchen, offering a fine dining experience, complete with waiter service.

Orthodox Jews will be treated to food prepared by a self-taught chef who has never cooked outside the home.

But chef Aaron Sender, 34, landed the job at Masbia with a can-do attitude and belief in community building through eating. "Breaking bread with people and sharing in a joyful, celebratory way is something that's really nourishing," said Sender, who grew up in Borough Park.

Despite his inexperience, Sender will soon be cooking hundreds of meals a day for Masbia's new locations in Midwood, Williamsburg and Rego Park - all set to open in the coming weeks - and its existing site in Borough Park.

The five-course dinners will be prepared in Midwood, then delivered to the other soup kitchens, which are modeled after restaurants, with dividers to provide privacy, and will include waiters to make the experience feel more dignified.

"We think so many people don't come because they're embarrassed," said Masbia Executive Director Alexander Rapaport. "But it's going to be uplifting for them."

Rapaport was not worried about Sender's culinary background, because mass producing food doesn't require as much skill as fine dining.

Sender, whose resume includes stints as a science journalist and a laborer on an organic farm, was slightly nervous about the task ahead of him, but promised success.

Two or three other workers will assist him in the galley.

Most dinners will consist of chicken, mashed potatoes, another vegetable side, soup and dessert, but Sender hopes to eventually include diverse ethnic cuisine.

Officials from Masbia decided to expand their services into other neighborhoods when they saw hunger and poverty growing in Jewish communities.

Rabbi David Niederman, executive director of the United Jewish Organizations of Williamsburg, said his group, which runs a food pantry, is delivering hundreds more meals per week than last year.

"So many families are almost in chaos," said William Rapfogel, executive director of the Metropolitan Council on Jewish Poverty, which is providing funding for Masbia's expansion. "We're seeing people who've never had a financial problem in their entire lives."

NY Soup Kitchens Will Be "Classy" – And Kosher

An upscale Midwood kosher restaurant that closed in May will soon reopen as a kosher soup kitchen, offering a fine dining experience, complete with waiter service.
Failed messiah was established and run in 2004 by Mr. Shmarya (Scott)Rosenberg. The site was acquired by Diversified Holdings, Feb 2016.