Letter from Jerusalem: Between Baalat Teshuva and Britney Spears

What is the great attraction of Orthodoxy? I brought my daughters up with all the right ideas. We always had gender equality in our community and in our synagogue. We raised them to be activists, committed to equal rights. I don’t understand why girls would turn their backs on this in favor of Orthodoxy.”

Between Baalat Teshuva and Britney Spears
By Elana Sztokman 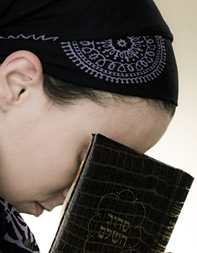 When I was an 18-year-old yeshiva high school graduate from Brooklyn, one of the biggest questions on the minds of my female friends and me — right after, who will get engaged next? — was, who is going to “frum out” in Israel? You know, it’s what happens during that post-high school yeshiva experience in Israel: the skirts get longer, the bowing gets deeper during prayers, which also increase in frequency. The phrases “Baruch hashem” (thank God) and “bli neder” (no vow) go from a mere drizzle in one’s vocabulary to a full blown hurricane, and obedience to one’s teachers completely overtakes all ability to think independently, express flexibility and demonstrate a sense of humor. Yes, frumming out. I went through a somewhat modified version myself. I spent around 5-6 years wearing floor-sweeping skirts, spent my first four years of marriage wearing a head covering (baruch hashem, that’s over) and for a while actually believed that reward and punishment were readily apparent in everyday life. (A few good terror attacks relieved me of that notion.)

I’m about to turn 40, and I’m (baruch hashem) over most of that now, as are many of my contemporaries. I often talk with my friends over Shabbat lunch about our journeys back and forth between religion, God and self. Although the journey is enlightening, I wonder how much of the pain is necessary. Put differently, some days I’m angry at my teachers.

I thought about all this recently at a rather surprising place. I gave a talk about Orthodox feminism to a group of Americans on an Israel Women’s Network mission to Israel, headed by a Minnesota state Senator, a Reform Jewish woman whose three adult daughters all became ultra-Orthodox — or what is mislabeled “baalei teshuva,” or “returnees,” (as if people who are not Orthodox by definition need to repent, as if becoming Orthodox is some kind of return to authenticity). Turns out, the Senator was coming to Israel to visit her daughter who had recently gotten married in Safed, and she converted the visit into a feminist mission. Now that, I thought, was novel.

During my session, we discussed many of the troubling trends in Israel around religion and gender: increased pressure for gender segregation in public spaces, the frightening tolerance for violence against women who are deemed non-conforming, and of course the weary struggle of agunot. Following the session, the Senator approached me and said, “So tell me, please. What is the great attraction of Orthodoxy?” Her question was weighted with frustration. “I brought my daughters up with all the right ideas,” she said. “We always had gender equality in our community and in our synagogue. We raised them to be activists, committed to equal rights. I don’t understand why girls would turn their backs on this in favor of Orthodoxy.” Her pain was palpable.

Why, indeed. Returnee activists will undoubtedly use this as “proof” of the superiority of their lifestyle. But I don’t buy that. In fact, the polarized juxtaposition of Western culture versus ultra-Orthodoxy is at the root of women’s entrapment. As if it’s either one or the other: If you don’t want to be a superficial, mindless, materialistic sex-object, cover up and come to us. The returnee movement feeds on people’s dissatisfaction with what Beverly Gribetz calls “great, big, shopping-mall America,” with Paris Hilton and Britney Spears as models of femininity.

But of course, there are worlds in between. It’s just not so easy for an impressionable 18–25 year-old sincere spiritual seeker to unravel the subtleties and summon courage to say, “None of the above.”

Moreover, the ultra-Orthodox “answer” to modern life is wrapped in an impregnable God-rhetoric. A friend of mine, a stay-at-home mother of six, once said, “I just have to remember that even when I’m picking up dirty socks, I’m doing God’s work.” Yeah, right, I thought.

“That’s the biggest crock I’ve ever heard,” I responded. But she didn’t like that. She was too exhausted, and too reliant on the rhetoric to keep herself happy amid her servitude.

I don’t have a good answer for the Senator or for my Orthodox acquaintances who want to know why (or whether) I’m still Orthodox. But I do, still, have prayer. And I pray that the Senator will find her daughters again.

Dr. Elana Maryles Sztokman is an educator, researcher, writer and activist, who lectures at the Schechter Institute for Jewish Studies and works in development at Mavoi Satum: The Organization Helping Agunot.

Letter from Jerusalem: Between Baalat Teshuva and Britney Spears

What is the great attraction of Orthodoxy? I brought my daughters up with all the right ideas. We always had gender equality in our community and in our synagogue. We raised them to be activists, committed to equal rights. I don’t understand why girls would turn their backs on this in favor of Orthodoxy.”
Failed messiah was established and run in 2004 by Mr. Shmarya (Scott)Rosenberg. The site was acquired by Diversified Holdings, Feb 2016.