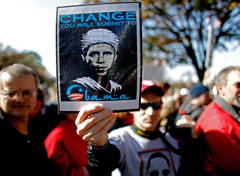 WASHINGTON - Republican leaders are pleased their health reform plan would lower premiums on average up to 10% - and shave $68 billion from the federal deficit.

But the nonpartisan Congressional Budget Office found an odd feature in the 230-page bill: Coverage would be more expensive for older people and folks who are sick.

And it would not bar insurers from excluding preexisting conditions.

Republicans spent months crafting the plan to compete with the Democrats' 1,990-page proposal, which includes a government-run insurance option.

"The pool of people without health insurance would end up being less healthy, on average, than under current law," the CBO says.

The GOP plan would add 3 million people to the insurance rolls by 2019, but the overall percentage of uninsured would stay the same.

What does Judaism say about this?

Here's the way I view it:
1. Judaism requires doctors to heal even if patients cannot pay anything.
2. In the same way, it requires patients to pay as much as they can based on need.
3. Insurance is a bridge that allows doctors to provide very expensive healthcare and still make a living. And it allows patients to get healthcare without going bankrupt and then needing to rely on public assistance and charity.
4. If that insurance is government sponsored or controlled, it means society has taken responsibility. As such, society can do either of the following:
a. It can charge sick people more money, elderly people more money and exclude preexisting medical conditions. But, if it does so, it must also:

1) make sure all medical and pharmacological needs are completely and swiftly met, even when the patient has no more money left to pay, and,

2) It must completely meet the housing, food and other needs of the impoverished so that each person impoverished by paying for healthcare is sustained at his former standard of living. That means if he ate steak for dinner 7 days a week, we must give him equal or better quality steak dinners every day. The same is true for housing, clothes and transportation.

b. it can structure a system where everyone has equal access to and pays an equal cost for healthcare (unless they are unable to pay) through national health insurance or something similar, perhaps even public-private partnerships.
5. But what society cannot do is what the GOP is now advocating, while at the same time it tries to further cut welfare and other safety net programs.
6. I do not see how Jews can support Republicans on this issue.

Posted at 11:53 AM in Halakha, Med-Ethics, Public Health | Permalink