Postville city leaders, residents and business owners agree the community's economy has hit bottom. What isn't clear is how fast and how far the recovery will go.

POSTVILLE - Postville city leaders, residents and business owners agree the community's economy has hit bottom. What isn't clear is how fast and how far the recovery will go.

An immigration raid in May 2008 shut down kosher meat processing plant Agriprocessors, the town's largest employer. The loss of jobs, was followed by an exodus of residents and steep decline in revenue in the Northeast Iowa community. 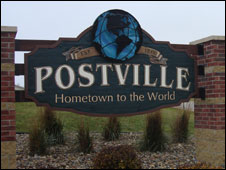 More than 100 of the Postville's 632 residential homes were put up for tax sale by the Allamakee County Treasurer's office in June. "For Sale" signs are still a common sight. Property tax and utility fee income has plummeted, straining the city's budget and empty storefronts line Greene Street. The closure propelled the unemployment rate in Allamakee County to around 10 percent. It remained 9.3 percent in September, according to Iowa Workforce Development.

Trevor Seiberts, owner of a construction company, laundromat, and dozens of rental properties has had to work harder just to stay afloat.

"I'm in enough businesses, and I have enough people around me that I've been able to keep up my mortgages," Seiberts said.

"It's slow, but it's still trying to survive," said Juan Pagaza, a Sabor Latino employee.

Some signs are emerging that the Postville economy is beginning to rebound. Of the 103 properties sold on tax sale for delinquent taxes, 70 have had their back taxes have already been paid off by their new owners, said Lori Hessey, Allamakee Treasurer.

Many small business owners, pushed to the brink, are holding on until a ramp up in production injects jobs and revenue into the town.

"If the other sections (of the plant) open, we'll have more business around here," said Pagaza.

The plant can also be a draw for other related businesses, said Steve Brustkern, executive director of the Black Hawk Development Corporation.

"In Postville's case, they have a gorilla to help jump start things," he said. The corporation has leads on potential businesses that either are considering locating or starting up in the Postville area that are in a related sector to the kosher processing plant, Brustkern said. He declined to provide more details about the opportunities.

The upbeat outlook is tempered, especially in the Jewish community where business leaders there are even more so dependant on the kosher plant.

"It's an optimism that's infused with 'we've heard that before,'" said Meir Simchal, who runs a kosher grocery store. He said his business' survival is contingent on the plant thriving and supporting the Jewish community in Postville.

"Part of the draw here is that the plant subsidized an oasis of Jewish living," he said.

The effect of the plant's temporary closure is also a reminder of the dangers of relying on one industry.

Other large mainstays in Postville, including Norplex-Micarta, an international laminates manufacturer headquartered in Postville, and distributor Hall Robert's Son Inc., have weathered the economic storm.

The Agri Star plant will likely not employ as many people as Agriprocessors did. Agriprocessors had more than 1,000 employees. Agri Star has more than 350 employees. Another approximately 150 people will be hired when beef production begins, said Rachelle Howe, Allamakee County economic development executive director. "You're not putting all your eggs in one basket," she said.

"It's very difficult to become diversified in a rural community," said Wendy Mihm-Herold, executive director of Upper Explorerland Planning Commission. The commission is based in Postville and is working with city leaders, business owners and property owners to secure grants, loans and other funding for improvement projects. The corporation helped the city draft grant applications for home renovations and homebuyers.

The city had teamed up with Agriprocessors in housing ownership - an enterprise that left the city with unpaid bills. Agri Star has expressed no interest in such a venture, Howe said.

"That's a mistake the city is not going to make twice," she said.

Agri Star's fortune's may be out of the city's hands in the end, but trying to make Postville a community in which people want to live is something city leaders say they can do more to control.

Seiberts said the housing market decline, the recession and Agriprocessor's woes created a perfect storm that hit Postville. An excess of rental housing compounded the problem, he said. The city's effort to rehabilitate existing homes and encourage higher home ownership could help offset another downturn, he said. Renters don't have equity in the homes they live in and rarely have interest no incentives to improve the properties where they live.

"You have to attract young couples to buy some of these houses," he said, adding the city and economic leaders, including banks, need to help sweeten the deal for first-time buyers.

"The best way to attract people to Postville is to make it much more attractive than anywhere else," he said.

With a year-and-a-half of negative attention, developers admit that is an uphill battle. The Postville Chamber of Commerce is working on ways to market the city.

"People were uneducated and assumed a lot of things about the community," Howe said.
Like the economy, it can only get better from here.

Postville city leaders, residents and business owners agree the community's economy has hit bottom. What isn't clear is how fast and how far the recovery will go.
Failed messiah was established and run in 2004 by Mr. Shmarya (Scott)Rosenberg. The site was acquired by Diversified Holdings, Feb 2016.