Interior Minister and Deputy PM Eli Yishai wants to expel all refugees and illegal aliens – and their Israeli-born children. 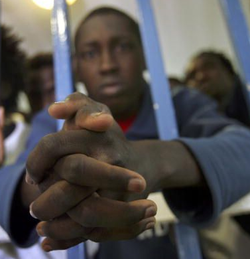 The government should force illegal aliens out of the country, as an influx of foreigners will bring drugs and disease into Israel, Interior Minister Eli Yishai told Channel 2 Saturday evening.

"We will have, based on what the internal security minister said in the last discussion, hundreds of thousands of foreign workers coming in here with disease like hepatitis, tuberculosis, AIDS, drugs…," he said.

"Would any one of Israel's citizens agree to have a million or two and a half million Sudanese and refugees from Eritrea come in here?" he said."'Doesn’t it threaten the Zionist enterprise of the State of Israel?"

Addressing the issue of expelling the children of illegal aliens, Yishai slammed their parents for "turning their children into a human shield."

"My problem is not with the children, but rather, with those who will enter the country illegal," he said. "The children will be their insurance policy for staying here. In 20 years people will be asking why we didn't enforce this law."

"Eli Yishai is an archaic racist who failed in his job as interior minister," Horowitz said.

Amnon Meranda and Yael Branovsky contributed to the report.

Interior Minister and Deputy PM Eli Yishai wants to expel all refugees and illegal aliens – and their Israeli-born children.
Failed messiah was established and run in 2004 by Mr. Shmarya (Scott)Rosenberg. The site was acquired by Diversified Holdings, Feb 2016.