Interracial Marriage Higher In Israel Than US, Report Finds

But Ethiopian Israelis still concentrated in urban ghettos in the country's central area – but not in Tel Aviv. 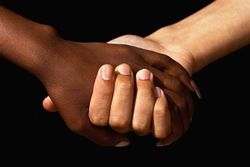 Intermarriage between between Jews from different ethnic backgrounds has increased steadily over the past several decades, and people say that this is solving the socioeconomic gaps that existed between Ashkenazim and Sephardim in Israeli society.

However, Ethiopian Israelis seem to be exempt from the trend, so far. According to a Central Bureau of Statistics report published on, about 90 percent of Ethiopians - 93 percent of men and 85 percent of women - marry within their community.

The statistical portrait of Ethiopian Israelis was published to coincide with the community's Sigd holiday, which is celebrated every year on the 29th of Heshvan on the Hebrew calendar, which is today.

At the end of 2008, there were 119,300 people of Ethiopian descent in Israel, including nearly 81,000 people born in Ethiopia and about 38,500 native Israelis (about 32 percent of the community) who had at least one parent who was born in Ethiopia. 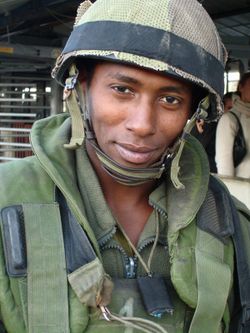 The urban areas with the largest concentrations of Ethiopians include Netanya, where one in 10 residents is Ethiopian; and Kiryat Malakhi, where one in three residents, or 3,400 people, are Ethiopian.

The election of Barack Obama, whose father was black and whose mother was white, highlighted the subject of interracial marriage. Nonetheless, the rate of racial intermarriage in the United States is lower than it is in Israel.

According to a study published in the U.S. two years ago, 6 percent of black people who married, married a white person, as opposed to 10 percent in Israel.

The Center for Academic Studies found last year that most Israeli respondents were not comfortable with the prospect of one of their own children marrying an Ethiopian.

Fifty-seven percent said it would be entirely unacceptable for their daughters to marry an Ethiopian, and 39 percent said so regarding their sons.

Avi Masfin, the deputy director of the Israel Association for Ethiopian Jews, says the barriers to intermarriage come from both sides.

"People who have left that isolation, through the army, the university [or] mixed clubs, can see that even if there are differences in culture, they can be bridged," he said.

Masfin, who immigrated from Ethiopia in 1986, is married to a woman who is not Ethiopian, whom he met while the two were students at Bar-Ilan University.

Here's the Jerusalem Post's version of the story:

Less than 0.05% of Ethiopians live in TA
By JPOST.COM STAFF

In honor of the Sigd holiday, celebrated by Ethiopian Jews to commemorate their acceptance of the Torah, the Central Bureau of Statistics published data about the Ethiopian community in Israel on Sunday.

According to statistics, most of Israel's 119,000 Ethiopians live in the central and southern parts of the country, especially in urban areas in which Jews constitute less than one-third of the population. Less than 0.05% of the community resides in Tel Aviv-Yafo, making up 6% of both cities' population.

The bureau's report showed that a very high percentage of Ethiopians in Israel marry into their community, men more so than women - 93% and 85%, respectively, averaging out at 89%. The percentage of divorced Israeli Ethiopian couples proved to be only slightly higher than the divorce rate in the general population.

Statistics were also compiled concerning education in the Israeli Ethiopian community, showing that the rate of those eligible for high school matriculation certificates has risen by six percent in the last ten years - thus reducing the gap between Ethiopian and native Israeli students, whose matriculation eligibility rate stood at 55% in 2008.

The dropout rate, however, was found to be lower among Israeli Ethiopian students than among their native Israeli counterparts - 1.54% and 1.78%, respectively.

In 2008, concluded the report, 2,183 babies were born in Israel to women of Ethiopian origin.

Posted at 09:26 AM in Bigotry & Racism, Ethiopian Jews, Israel | Permalink

Interracial Marriage Higher In Israel Than US, Report Finds

But Ethiopian Israelis still concentrated in urban ghettos in the country's central area – but not in Tel Aviv.
Failed messiah was established and run in 2004 by Mr. Shmarya (Scott)Rosenberg. The site was acquired by Diversified Holdings, Feb 2016.