IDF Chief Rabbi: Soldiers Who Show Mercy To The Enemy Will Be "Damned"

IDF Chief Rabbi: Troops who show mercy to enemy will be 'damned'
By Anshel Pfeffer• Ha'aretz 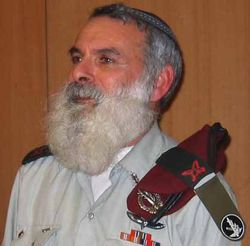 The Israel Defense Forces' chief rabbi told students in a pre-army yeshiva program last week that soldiers who "show mercy" toward the enemy in wartime will be "damned."

Speaking Thursday at the Hesder yeshiva in the West Bank settlement of Karnei Shomron , Rontzki referred to Maimonides' discourse on the laws of war. That text quotes a passage from the Book of Jeremiah stating: "Cursed be he that doeth the work of the Lord with a slack hand, and cursed be he that keepeth back his sword from blood."

In Rontzki's words, "In times of war, whoever doesn't fight with all his heart and soul is damned - if he keeps his sword from bloodshed, if he shows mercy toward his enemy when no mercy should be shown."

Rontzki's remarks came during a ceremony to celebrate a new Torah scroll at the yeshiva. The service was held in commemoration of Yosef Fink, one of two yeshiva students kidnapped by Hezbollah in 1986.

Their bodies were returned 10 years later in a prisoner exchange.

Rontzki also referred specifically to the Israel Defense Forces' conduct during Operation Cast Lead in Gaza. "Apropos all that we've heard in the media of late, thank God that the people of Israel has united recently around the simple understanding of how it must fight. One of the major innovations of that offensive was the conduct of war - not as some kind of mission or detention."

"We all remember the beginning of the war, with a major attack of 80 planes bombing various places, and then artillery, mortar and tank fire and so forth, as in war," he said. "Everyone fought with all their heart and soul, and that includes bravery of course, but also fighting with all the resources one has - to fight as if to truly determine the mission."

Rontzki also referred to the qualities of the ideal combat soldier.

"In Israel's wars, warriors are God-fearing people, righteous people, people who don't have sins on their hands," he said. "One needs to fight with an understanding of what one is fighting for."

IDF Chief Rabbi: Soldiers Who Show Mercy To The Enemy Will Be "Damned"