A few months ago, a high-ranking rabbi and spiritual leader at the Beth Medrash Govoha yeshiva, Matisyahu Salomon, quietly closed a rabbinical court, a Bais Din, that handled many of Lakewood's sex abuse allegations.

The boy was raped before he could take his weekly mikvah. Pinned from behind in the bathhouse where Orthodox Jews purify themselves with rain water, the 7-year-old never saw his attacker.

Now 29, Joseph Diangello no longer wears a yarmulke. He plays the drums and sports tattoos of heavy metal bands. He changed his name to one that sounds less Jewish. On Sept. 26, he stood in a synagogue for the first time in years, he said, before a sea of bearded men in black hats and women in customary wigs. For a brief moment, there was a sense of pride for the heritage he left behind.

"This is the first time I'm validated in the Orthodox community," he said into the microphone, according to an audio recording of the event posted on a Jewish blog site.

Other victims spoke that night in Passaic, including a 16-year-old girl who was raped in her bed for years by a family friend. Most of them had never before shared their stories publicly. In March, a similar forum in Teaneck drew about 60 people. Seven months later in Passaic, attendance was more than 300.

Evidently, addressing child molestation in Orthodox communities is no longer a quiet process. From the back channels of private dialogue and in-house cleaning, it has in recent months swelled into a flash flood of popular debate. Panel discussions moderated by rabbis and led by victims' testimony attract crowds in the hundreds from New Jersey to Baltimore. Front-page headlines crisscross secular and Jewish newspapers. Pedophile arrests have jumped by as much as 800 percent in Brooklyn.

Advocates have called this fall a tipping point.

"In the beginning, it was like trying to open a can with your teeth," said Mitch Morrison, a writer and campaigner for sex abuse transparency among the Orthodox. "Now it's like we have a can opener."

In Lakewood, which has been called this country's "Rome" of scholarly Orthodox communities, change has begun, but with a subtler tone. Community leaders are planning two closed-door seminars in December: one to teach school officials, clergy and social workers ways to identify possible offenders and detect warning signs; the other, to teach parents prevention skills. 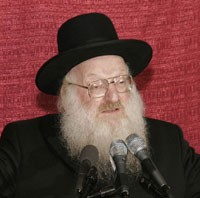 And a few months ago, a high-ranking rabbi and spiritual leader at the Beth Medrash Govoha yeshiva, Matisyahu Salomon, quietly closed a rabbinical court, a Bais Din, that handled many of Lakewood's sex abuse allegations, according to two rabbis. Such Batei Din have come under criticism by child advocates, therapists and victims' families for deciding molestation cases without alerting secular law enforcement. Internally ruling on alleged offenses through a venue with no real judicial powers, they say, could let suspected pedophiles go with little to no therapy or monitoring.

Efforts to reach Salomon were unsuccessful.

But perhaps the most progressive move was the Lakewood Orthodox leadership's meeting with Ocean County prosecutors twice in two weeks to fuse for the first time a joint approach to sex abuse. Rabbi Moshe Zev Weisberg, who runs the social aid agency Lakewood Community Services Corp., said the most recent sit-down Nov. 20 focused on appointing a liaison between the Prosecutor's Office and the Orthodox community. Being from the community, the appointee would help prosecutors and investigators gain the trust of Orthodox residents who have long been wary of outsiders.

"The purpose is to bridge the cultures," said Weisberg, who brought two social workers and support staff to the hour-long meeting with Ocean County Prosecutor Marlene Lynch Ford and members of her staff. "It's to convey to the victim that prosecutors are sensitive to our religious differences."

Ford said her office is looking to borrow from the Kings County (N.Y.) district attorney, whose office has hired its own liaison and started a hotline that uses Orthodox social workers to persuade reluctant victims to report sex crimes. In the past year, 26 arrests were made within Brooklyn's Orthodox enclaves, The New York Times reported in October, a near-vertical leap from the few, if any, arrests in previous years.

"We're using Brooklyn as a jumping-off point," Ford said in a phone interview after the meeting. "We do realize we're not reaching everyone we'd like to reach and we're trying to improve on that."

The pilot program would proceed on a trial basis with the hope of eventually broadening to other ethnic groups such as Latinos, Ford said. She added, however, that her budget might not allow for expanding her staff, so the liaison likely would be on loan from another law enforcement or social service agency.

The next steps are setting dates for prosecutors to educate Orthodox leaders on the criminal process, followed by inviting religious representatives to discuss the "interesting yet unique cultural mores" that could hinder sex abuse reporting, Ford said.

Statistics show that child molestation is no more common in Orthodox communities than elsewhere.

Yet total reliance on secular law enforcement was never the endgame. The Bais Din closing likely had less to do with any policy shift than a breakdown over one case, rabbis have said. Weisberg called the tribunal system a "complementary process" to "a holistic approach."

"The Bais Din still has its place. They have tools the prosecutor does not have," he said. "We just need to figure out how to interface with prosecutors."

Reform across the Orthodox landscape isn't lockstep. Unlike the Catholic Church, the haredim do not have one authority, but separate leadership in each community. Progress, then, occurs in stages and at different rates, said Rabbi Yosef Blau, a spiritual adviser at Yeshiva University in New York. Many of Passaic's Orthodox residents, for example, are baalei teshuva — those with nonreligious backgrounds who were "born again" into Judaism — and so may be prone to more modernized thinking, said Morrison, who lives in the North Jersey city. Conversely, Lakewood's population, composed mainly of Litvaks, or Lithuanian Jews, is perceived as the most tightly knit, religiously strict community in the region, if not the nation, making traditions difficult to break and change difficult to bear.

"It was set up as an island to re-create the yeshivos in Eastern Europe," Blau said. "To be removed from all influences of American society."

Such walls have frustrated Orthodox social workers trying to make dents in the sex abuse problem.

"That's why they insist we have to get it right this time," Weisberg said, referring to Batei Din and the program with prosecutors. "If we don't get it right, we take two steps backward."

Yet, as home to one of the largest and most respected yeshivas in the world, Lakewood is also a breeding ground for free thinking and powerful influence. Any budge in mind-set, therefore, is glacial but resounding, according to people in the Orthodox communities.

"A shift in Lakewood would impact the entire Litvak world and, in time, possibly the Hasidic world," said Ben Hirsch, founder of the victims advocacy group Survivors for Justice. Hasidic sects are found in many parts of Brooklyn.

Concern over sex crime reporting in Orthodox neighborhoods has been bubbling for years. Child advocates attribute the recent escalation to a plethora of blogs and support groups that give emboldened victims a voice.

Ronald D. Price, the executive vice president of the Union for Traditional Judaism, saw it simply as the glass ceiling to old thinking.

"We blithely thought that religious values would keep this from happening," he said. "But enough evidence has come forward where you reach that tipping point, and a responsible leader has to acknowledge it, even if he doesn't want to."

Perhaps faster than change among the leadership in Lakewood, though, has been the rise of residents' awareness. For one mother, the July arrest of her son's yeshiva teacher, Yosef Kolko, on charges of sexually assaulting a young boy was an eye-opener.

Asked what she'd do if she saw symptoms of abuse with her own child, the woman, who asked not to be identified, said: "I'd run to the police the first second and make sure there was justice."

A few months ago, a high-ranking rabbi and spiritual leader at the Beth Medrash Govoha yeshiva, Matisyahu Salomon, quietly closed a rabbinical court, a Bais Din, that handled many of Lakewood's sex abuse allegations.
Failed messiah was established and run in 2004 by Mr. Shmarya (Scott)Rosenberg. The site was acquired by Diversified Holdings, Feb 2016.