« Do You Have Information That Could Help With The Prosecution Of This Case? | Main | Letter from Jerusalem: Intel Inside? Prove It »

The new terminal included both a church and a mosque, but they never were built. 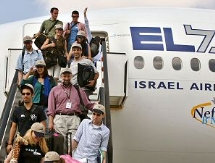 Ultra-Orthodox political pressure has stalled the construction of a church and a mosque at Ben-Gurion International Airport for the past five years, aviation sources told Haaretz.

This came to light after several clergy members wrote to the Israel Airports Authority, requesting it allow for a church in Terminal 3.

Haaretz inquired, and learned that the plans for the new terminal included both a church and a mosque, but that they never were built.

IAA spokeswoman Ronit Ekstein said she "would rather not comment at this stage."

The request for a church inside the terminal was made by one of the leaders of the Belgian church in Jerusalem, Father Christian Eeckhout.

Eeckhout sent a letter to Eldad Yaniv, the IAA official responsible for relations with aviation companies, and suggested that space inside the terminal be allocated for a church, which would be used mostly by pilgrims passing through.

He based his request in part on the fact that the airport has two synagogues, one of them in Terminal 3.

The new terminal at Ben-Gurion, which opened in October 2004, was supposed to have had a mosque and a church.

The IAA director of public complaints, Telma Shamir, confirmed this in writing as early as 2003, in response to a letter by Eitan Heller.

Heller, a former Geocartography Institute employee who conducted surveys at the airport on behalf of the tourism ministry, wrote to Shamir, under the name Ahmed Beck from Jaffa, to complain that there was no mosque at the airport.

Shamir responded to him in 2003: "I have checked the matter on several occasions. Unfortunately, we cannot approve your request due to lack of space in the current terminal ... but as we have learned from our mistakes, space has been allocated for a worship area for Christians and Muslims at the new terminal, which we hope to inaugurate next summer."

In 2006, then-IAA director issued an order to set up a prayer room for Muslim passengers in Terminal 3. The mosque was supposed to have been allocated 20 square meters, and include a library with copies of the Koran.

However, the mosque still does not exist.

You know what else is missing from Ben Gurion airport?

The new terminal included both a church and a mosque, but they never were built.
Failed messiah was established and run in 2004 by Mr. Shmarya (Scott)Rosenberg. The site was acquired by Diversified Holdings, Feb 2016.