Haredi Rabbis To Be Punished Over Refusal To Accept Conversions

'Rabbis may be punished over converts'
By MATTHEW WAGNER • Jerusalem Post

Attorney Shimon Ulman told the Knesset Immigration and Absorption Committee that it was unlawful for city rabbis to refuse to recognize conversions performed by the chief rabbinate rabbinical court.

In a telephone interview after the Knesset meeting Ulman told The Jerusalem Post that although the procedure was a long one, he would initiate disciplinary actions against rabbis.

"Government authorities must coordinate to force city rabbis to abide by the law. We will send indictments out to rabbis and, although I think it is unlikely, we could even end up firing rabbis who refuse to accept authority."

Since 2004 when the state of Israel created the National Conversion Authority, conversions have been seen as a way of integrating a large non-Jewish population that immigrated to Israel from the Former Soviet Union. This population is seen by some as a danger to Jewish continuity. For the first time since the creation of the state, intermarriage between a Jew and a non-Jew has become a reality.

There are approximately 300,000 immigrants to Israel from the FSU who received automatic citizenship under the Law of Return because of their familial relationship with Jews. But these immigrants are not considered Jewish according to Orthodox standards.

In order to marry in Israel these immigrants must either go abroad or convert to Judaism.

Over the years dozens of immigrants who have opted to convert have come up against difficulties when they attempt to register for marriage. 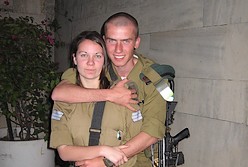 In a recent case in Ashkelon, Maxim Surdekov, who was born to a Jewish mother, and Elina Roiz, who converted to Judaism in 2006 during her IDF service under the auspices of the Chief Rabbinate, were rejected by Ashkelon's chief rabbi, Yosef Haim Bloi.

"The rabbi said that Elina is not Jewish because her conversion is no good," Surdekov said.

"And this was after we showed him Elina's conversion certificate which is signed by the Chief Rabbinate and after the certificate was approved by Ashkelon's rabbinical court."

Surdekov and Roiz, who appeared before the Knesset committee, are being represented by ITIM, an organization that helps Israelis navigate religious bureaucratic affairs.

Rabbi Seth Farber, the head of ITIM, who is planning to marry the couple at the beginning of January, said that Wednesday's meeting was a positive step.

"This is the first time that a Knesset meeting has led to concrete suggestions on how to solve a situation in which rabbis disregard the law," he said.

Meanwhile, Ashkelon's chief rabbi, who was invited to the Knesset meeting but refused to come because representatives of the Reform and Conservative movement were also invited, defended his decision not to recognize Elina.

In a telephone interview with the Post, Bloi said that Elina and many other converts who converted to Judaism during their IDF service should not be considered Jewish.

"There is no conversion without a total acceptance of an Orthodox lifestyle," said Bloi, who is related to Amram Bloi, the former leader of Neturei Karta, and is the grandson and namesake of former chief rabbi of Jerusalem Yosef Haim Zonenfeld.

"If we see that a few days after someone converts he goes back to living a secular lifestyle than we can assume that there never was a sincere intention to convert and that person is not a Jew," said Bloi.

Asked what he thought of the threat of the legal adviser to the chief rabbinate, Bloi said that he was not too concerned.

"I believe that the majority of the rabbis in the chief rabbinate agree with me that someone who does not accept an Orthodox lifestyle cannot be considered a convert. Besides, I am retiring soon anyway."

Bloi said that he originally planned to take part in the Knesset committee meeting. But one day before the meeting he found out that representatives of the Reform and Conservative movements would be attending as well.

"I am willing to sit with secular Jews, but there is no way that I will sit in the same room with a Reform or Conservative Jew and discuss conversions. It's like taking part in a Gay Pride Parade."

Haredi Rabbis To Be Punished Over Refusal To Accept Conversions

"We cannot have a situation in which a rabbi who receives a salary from the Chief Rabbinate refuses to accept the decisions of that same Chief Rabbinate."
Failed messiah was established and run in 2004 by Mr. Shmarya (Scott)Rosenberg. The site was acquired by Diversified Holdings, Feb 2016.