Haredi MK Demands Affirmative Action For Haredim, Denies Rabbis Are In Any Way To Blame For Unemployment

"Haredi men want to work, Haredi women want to work. The government doesn't want to integrate them into the work force. This is an ideological battle."

The unhappy reality is that the Haredi aspiration to live a life of bare subsistence, coupled with Israel's subsidies of ultra-Orthodox society, mean that many Haredi families can eke out an existence without working. Put otherwise, it doesn't pay for them to work. They don't achieve anything they particularly want thereby.

Haredim get free daycare, large family subsidies, and other support from the state, and their lack of job skills caused by their intentionally weak educational system means any employment will be low paying – so low paying that it doesn't pay for haredim to work.
For years, this has been just what haredi leaders wanted. Haredim who do not work do not need to regularly leave haredi neighborhoods – so they don't. They stay inside the ghetto where they only see what haredi leaders let them see. This insularity spawns obedience to the haredi way of of life and its rabbinic leaders.
Yet, despite all this, haredi leader Rabbi Yosef Shalom Elyashiv's pawn in the Knesset, Rabbi Moshe Gafni, thinks haredi poverty and unemployment are the fault of the secular state:

Gafni: Haredim want to work, but state doesn't want them to
By Yair Ettinger • Ha'aretz 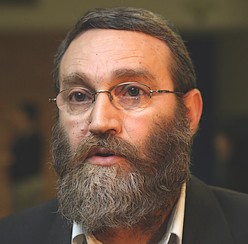 Gafni said the primary obstacles to ultra-Orthodox integration into the work force come from the government, not from private employers choosing not to hire Haredim.

For example, he said, the Tax Authority has refused to certify graduates of Beit Yaakov, an ultra-Orthodox school system for girls, as tax advisers, even though they have been accredited in a process that ends with exams similar to the regular bagrut (matriculation) exams.

"They take all the tests," Gafni said. "They learn math, physics and biology. But they are not granted [certification], they do not become tax advisers, even though everyone admits they're better than others."

Two years ago, a furor erupted when rabbis demanded that the Beit Yaakov schools cancel all degree-granting programs. But Gafni insisted that this had no impact on Haredi employment; instead, he blamed the low work force participation among Haredim on faulty government policy.

"Either you want to adapt yourselves to us and us to you, or you only want us to do what you want," he said.

"Haredim want to earn their livelihoods honorably and contribute to the economy, but no government has wanted to address this," he continued. "I say there must be affirmative action for Haredim, as there is for other sectors of society. But the Justice Ministry tells me there's no such thing as a 'Haredi' group. I tell them, what do you mean there's no such definition? One who's kept down by the country, that's a Haredi."

Meirav Arlosoroff lnotes that it does not pay for haredi men to work::

Talmid Chacham, wise student, is the highest status possible in Haredi society. It is the status of Torah prodigies (iluim). Talmidim chachamim win adulation from all directions.

In fact, they win more than adulation. They are well-rewarded for their efforts.

Talmid Chachamim are at the top of the heap when it comes to matchmaking, which means they generally get to marry the choicest women in the community. That in turn means women with the biggest dowries.

In the case of a Talmid Chacham, the wife's parents are supposed to provide for all his needs, including housing and furnishings. Not only that: The Talmid Chacham gets scholarships to study.

The bottom line is that Talmidim Chachamim do well for themselves.

"The importance Haredi society ascribes to having yeshiva student status is a significant barrier to incorporating Haredi men into the jobs market," writes Haggai Levin, a member of the National Economic Council, which operates under the auspices of the Prime Minister's Office. "A young, single Haredi man trying to find a job is likely to find his social status suffering, and accordingly, his ability to find a good match and get a high scholarship at a kollel will be impaired."

A Haredi family that brings in just enough to eke out a bare living would prefer to maintain that minimalist lifestyle and have the sons study Torah and the mother take care of the kids, as opposed to having the lot of them get jobs and live by higher standards. So in short, Haredi families have no motivation to join the workforce.

Not seeking the luxuries of secular life

The unhappy reality is that the Haredi aspiration to live a life of bare subsistence, coupled with Israel's subsidies of ultra-Orthodox society, mean that many Haredi families can eke out an existence without working. Put otherwise, it doesn't pay for them to work. They don't achieve anything they particularly want thereby.

According to Levin's analysis, a six-person Haredi family in which neither parent works can get NIS 5,000 a month.

How? It starts with NIS 910 in child allowances, NIS 940 in income supplements that the state pays only to Haredim, and NIS 700 in scholarships from the Education Ministry - so far we have NIS 2,500 a month just from state subsidies.

Also, the family can economize, again courtesy of the state. Daycare is fully paid for, and they are fully exempt from tax, including arnona - city tax. In recent years the Welfare Ministry has been running a program to fully finance education and living expenses for 10,000 Haredi teenagers. Naturally one precondition for the program is that neither of the teenager's parents work.

The Haredim also receive support from sources outside Israel. First and foremost, the kollelim receive donations and give them to the community in the form of scholarships, as much as NIS 2,000 a month per recipient. The families of kollel students also receive coupons for the holidays. And then there is employment, off the books and naturally hidden from the taxman, of kollel students' family members. The jobs are usually moonlighting sorts of things, such as tutoring by the father, or a small business run by the mother.

In total, with help from the state and abroad, and a small sideline, the family can reach about NIS 5,000 a month, and their expenses are low.

Now, if somebody in the family works and makes minimum wage, NIS 3,700 a month, then their allowances are reduced, and they start paying some level of municipal tax and daycare, too. If the man works he loses his kollel scholarship, which as said can reach NIS 2,000 a month, and he also has less time for his side job.

The difference in income between only the mother working, versus both parents working, is small. It certainly isn't big enough to justify the loss of the father's status as a Torah student.

Levin's figures rely on information from the Joint Distribution Committee in Israel, which runs programs to encourage Haredim to work. "A Haredi man will demand at least NIS 4,500 to NIS 5,000 a month or he won't work, yet he's coming to the market without minimal education and skills," laments Reuven Gorbez of the Joint.

Does Israel in its generosity actually disincentivize Haredim to work? Yes. The figures show that the allowances coupled with discounts enable Haredi families to eke out a living without work.

Left unmentioned is that every attempt to cut these state benefits has been met with outrage from haredi leaders, often complete with threats to bring down the government.

Haredim want the benefits of a strong army, but they refuse to serve in it.
Haredim want large state benefits to be given to them, but they refuse to contribute to the economy that is supposed to pay for those benefits.
In other words, haredim want a lot but give back very little.
This disparity won't be remedied by affirmative action.
This disparity will be remedied by forcing haredi schools to comply with the law, and withholding all state funding from haredi schools that refuse to do so, and it will be remedied by compulsory army service for all but a handful of haredi men.
But these are two solutions haredi leaders will never agree to.

Haredi MK Demands Affirmative Action For Haredim, Denies Rabbis Are In Any Way To Blame For Unemployment

"Haredi men want to work, Haredi women want to work. The government doesn't want to integrate them into the work force. This is an ideological battle."
Failed messiah was established and run in 2004 by Mr. Shmarya (Scott)Rosenberg. The site was acquired by Diversified Holdings, Feb 2016.