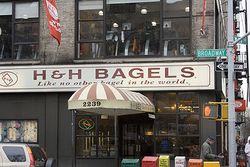 The city's biggest bagel maker will suffer a million-dollar hole in the middle of his finances if convicted of ground-breaking tax-cheat charges, the Manhattan DA said today.

H & H Bagels -- an iconic, Upper West Side-based operation that boasts of making 80,000 bagels a day -- stiffed the state on some $400,000 in taxes, DA Robert Morgenthau said in announcing the arrest of company founder Helmer Toro.

If convicted, the 59-year-old boiled-dough poobah, who founded the company in 1972, faces more than a baker's dozen years in prison -- up to 15 -- on grand larceny, and could be hit with a $1.2 million bill for restitution, penalties and interest, officials said. 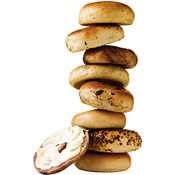 Toro pleaded not guilty this afternoon in Manhattan Supreme Court, and was released on his own recognizance. He left without commenting on whether the charges were just a schmear campaign.

The bakery's beloved bagels have garnered screen shout-outs by Woody Allen, who personally carried an H & H bag in "Manhattan Murder Mystery," and Jerry Seinfeld, whose sidekick Kramer in one episode tried to return to work there after a 12-year strike.

Carrie Bradshaw of "Sex in the City," Turtle of "Entourage" and Dwight of "The Office" have all indulged on air.

H & H busks bagels out of its original location at 2239 Broadway near 80th Street, and has its main bakery plant at 46th Street and 12th Ave. The company employs about 100 people.

Of the total $400,000 Toro is accused of pocketing, $369,318 was cash he collected through withholding taxes from employee paychecks but then never remitted to the state, said William Comiskey, the state's deputy commissioner of tax enforcement.

Six times, Toro would re-incorporate the bulk of his employees under a new company name -- and so was able to pay unemployment insurance taxes under the lowest rate, reserved for brand new businesses, Smith said.

"This is the first prosecution of unemployment insurance tax rate manipulation in the country," Smith said, noting that her office has recovered $20 million in civil penalties from 354 employers caught using the same growing kind of roll-over scheme.

Iconic Upper West Side-based operation that boasts of making 80,000 bagels a day.
Failed messiah was established and run in 2004 by Mr. Shmarya (Scott)Rosenberg. The site was acquired by Diversified Holdings, Feb 2016.