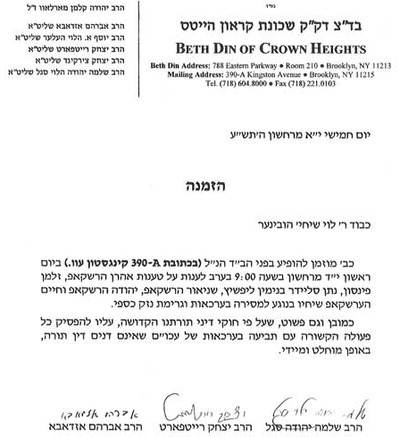 CROWN HEIGHTS, Brooklyn [CHI] — It has been the talk of town for a week, six Crown Heights men who volunteer in Shomrim facing jail time for an alleged brawl in which Jews pressed charges against them. Many were taken aback by the inaction on behalf of the rabbinic authorities in the community, but that changed on Erev Shabbos.

Rabbis Avrohom Osdoba, Shlomo Yehuda Segal, and Yitzchok Raitport issued a summons to a Din Torah to five of those involved in what they called “the terrible sin informing on Jews to the secular courts.” Those summoned included Levi Paul Huebner, an attorney for Shmira, who Shomrim claim has been pursuing them by making frivolous police reports and bringing civil actions against the organization and its individual members. As well as four of the Tzfati Bochurim who are the ones pursuing the actual charges, Elkon Moshe Gurfinkel, Zalman Bronshtein, Schneir Rotem, and Yakov Shatz.

In the Beis Dins summons the Rabbonim issued a clear directive stating “according to our torahs laws and customs this is prohibited,” and ordering all those involved to immediately cease all actions relating to the police and the secular courts, which are not the rule of torah, immediately.

The Din Torah is scheduled to take place tonight, Sunday at 9:00pm, due to the urgency of the matter.

“We have little confidence that [the Bochurim] will show up” said Aron Hershkop, who spoke on behalf of those involved “they spread rumors that they offered us peace and that we refused, it is a lie!”

Hershkop added that he wished they show up and the whole matter can get resolved amicably. “There is clearly a driving force behind these Bochurim who told them not to sit down with us” he said, adding “that at one point we even had a meeting time set up one evening but they never showed up, and the following day two police detectives along with Levi Huebner showed up at my place of work and warned me that any contact I have with the Bochurim would be considered witness tampering and that I would be locked up.”

“So you tell me, who doesn’t want peace?” concluded Hershkop.

On the other side of things, Shomrim reported an amazing outpouring of support from Crown Heights residents as well as many from Boro Park and Flatbush who donated money to the Shomrim Defense Fund to help out with the legal fees…

Posted at 10:35 AM in Chabad, Crime, Litigation, etc., Haredim | Permalink