Bill would have extended limits for prosecution of child sexual abuse.

In an unusually overt step into politics by a religious leader, the Roman Catholic bishop of Brooklyn is urging voters, via robocalls, to support Vito J. Lopez, an assemblyman and the Brooklyn Democratic boss, whose hand-picked candidate is in a tough race for a City Council seat. 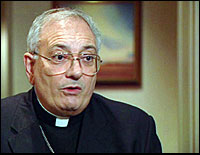 The bishop, Nicholas A. DiMarzio, in a recorded phone call sent to every registered voter in City Council District 34, praised Mr. Lopez’s legislative service to the Catholic Church this summer. Mr. Lopez played a key role in defeating a bill that would have let adults file suit over childhood sexual abuse that may have occurred long ago.

Mr. Lopez, a longtime kingmaker in Bushwick and Williamsburg, Brooklyn, has energetically championed the candidacy of Maritza Davila, who is running against Councilwoman Diana Reyna in District 34.

By recording his message, a legal scholar cautioned, Bishop DiMarzio could be treading close to legal lines limiting political advocacy by nonprofit organizations — whose tax-exempt status could be jeopardized.

“There are constitutional rules and I.R.S. rules, and the I.R.S. rules are really more pertinent here,” said Nelson Tebbe, an associate professor at Brooklyn Law School who specializes in the relationship between religion and the Constitution.

Bishop DiMarzio’s spokesman, Msgr. Kieran Harrington, dismissed that concern as absurd. “His intent was to thank Vito, who has taken the greatest grief for helping us,” he said.

Officials with the Diocese of Brooklyn, which includes 1.5 million Catholics in Brooklyn and Queens, have made no secret of their dislike for Ms. Reyna and Representative Nydia M. Velasquez, who, along with local nonprofit housing groups, have fought Mr. Lopez over the rezoning of a 31-acre parcel in Brooklyn called the Broadway Triangle.

Ms. Reyna and Ms. Velasquez have suggested that the diocese ousted a priest as head of a local housing group because he annoyed Mr. Lopez, and that in exchange, Mr. Lopez derailed the child abuse bill in Albany.

In September, Monsignor Harrington was scathing in his attack in a column in The Tablet, the diocesan newspaper. “If Catholics voted,” he wrote, “is it conceivable that Congresswoman Nydia Velazquez and Councilwoman Diana Reyna would insult our own bishop with impunity?”

On Sunday, the monsignor said: “Reyna is hypercritical of the bishop and the diocese. If the bishop had wanted to do a recording about her, he would have done a recording.”

Ms. Reyna, who is Catholic, declined comment on Sunday. Her supporters privately say that they see little benefit in engaging in an open war with the church, particularly since a number of priests showed up at a recent rally supporting Mr. Lopez.

A week ago, Mr. Lopez was honored for his leadership in one local church, and Ms. Davila sat next to him in the pew.

“If the church wants to honor Assemblyman Lopez, why not do this Nov. 5?” asked Rob Solano, director of Churches United for Fair Housing, which has clashed with Mr. Lopez over the Broadway Triangle. “Why so close to an election if it’s not political?”

Mr. Lopez’s loyalties can shift unpredictably. Ms. Reyna, for instance, once served as his chief of staff. And he once backed the bill in Albany that he later derailed.

Ms. Davila narrowly lost the Democratic primary to Ms. Reyna, the incumbent. Now Ms. Davila is running for the seat on the Working Families Party. And Mr. Lopez, the borough’s Democratic leader, has broken with his party to support her.

Mark Meyer Appel, the anti-haredi-child-sexual-abuse advocate who alerted me to this story, said, "It is outrageous that certain representatives of the hasidic community have worked with this bishop to fight passage of bills that protect our children from being sexually abused."

It is outrageous.
And Satmar and Agudath Israel, two of those "certain representatives," should be held accountable.

Bill would have extended limits for prosecution of child sexual abuse.
Failed messiah was established and run in 2004 by Mr. Shmarya (Scott)Rosenberg. The site was acquired by Diversified Holdings, Feb 2016.