A bookshelf doesn’t garner much attention. Its shelves are divided into sections like child-rearing and art. It’s only the titles in the adult literature section that seem incongruous: Bringing Heaven to Earth, Opening the Tanya, and My Spiritual Journey.

Tablet Magazine has a long article on Chabad preschools.
Here's the money graph:

There’s another goal too, which Chabad is quite up-front about, although you won’t see it 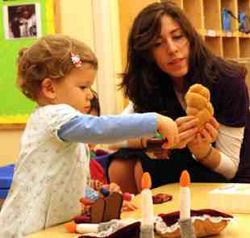 printed on admission brochures: reaching out to the parents of the children. “It’s all about the relationships, the personal relationships,” says Devora Krasnianski, coordinator for the Chabad Early Childhood Education network. “It’s not just the child who comes to the school. It’s really connecting with the whole family.” Rabbi Nochem Kaplan, national director of Chabad’s education arm, puts it more directly. “Chabad preschools are created to serve not only as institutions of early childhood learning,” he wrote several years ago, “but as vehicles to reach out to the families of the children who attend.”

In other words, Chabad uses its nationwide network of preschools to entrap naïve parents who do not realize what Chabad's agenda truly is.
Before you say this is no big deal, and that everyone should know enough about Chabad to know what its true goals are, ask yourself if you would say the same thing if those preschools were run by Jews for Jesus or the American Board of Missions to the Jews.
Rabbi Kaplan's admission was written in an internal Chabad document meant to spur Chabad preschool-as-family-outreach development, and Krasnianski's is made in the context of endorsing outreach to ensure Jewish continuity. As Tablet notes, you won't find these admissions in the glossy brochures distributed to prospective students' parents or in advertisements placed in local papers.
This is the fundamental problem with most kiruv: it is based on deceit. Information is withheld, true intentions are disguised, smooth words are spoken, and the truth – be it Aish HaTorah's and Ohr Somayach's real position on the age of the universe (just under 6000 years old), or Chabad's real position on driving on Shabbat or peace in Israel – is often nowhere to be found.
Tablet errs once by omission in an otherwise good article:

…Chabad-affiliated preschools are, by most accounts, effectively run, successful centers of education. They are licensed by the state as well as accredited by Chabad. …

One very public account Tablet missed is the scandal surrounding Chabad's Staten Island preschool, shut down by the city in 2005 for being both unlicensed and unsafe. It had "no sprinkler system and insufficient fire exits."

A Staten Island day-care center was shut down yesterday when firefighters — after reading about its grand-opening celebrations in a local paper — paid a surprise inspection and found it was unlicensed.

The Torah Tots Academy, which was run by the Jewish sect Chabad Lubavitch, had about 80 kids from 2 to 5 years old enrolled, authorities said.

The site of the day-care center — which was run out of two neighboring houses, at 289 Harold St. and 389 Bradley Ave., and a trailer — was also home to Yeshiva Mesivta Menachem and a synagogue.

FDNY brass had initially inspected the site weeks ago.

The program's coordinators had said then that they didn't have the license on them because it was Passover, fire officials said.…

Once the authorities revisited the place, they quickly learned there was no Health Department license to run a day-care center at Harold Street.

Inspectors also found that at the Harold Street building there was no sprinkler system and insufficient fire exits.…

Chabad's International 'news service', as is its practice, lied about the event and implied antisemitism was behind the city's actions:

…[N]ormal naptime at the preschool had been disturbed by an intrusive contingent of firefighters and city officials who came prodding and poking their way into classrooms in search of building and code violations. Turns out all that was missing was a Certificate of Occupancy, which is now being processed.… [emphasis added]

When the city shut it down, the Torah Tots Academy lacked adequate fire exits, had no sprinkler system, and was unlicensed.
Chabad's International headquarters lied about that.
How many other corners have Chabad cut? How many other Chabad preschools and daycares are unsafe?
Perhaps most, even the vast majority, of Chabad preschools and daycares are safe and licensed. Perhaps.
But do you really want to trust the safety of your child to an organization whose first concern was to protect its public image – not protect the children in its care?
Previous Posts: 1, 2, 3.
Table Magazine Article.

Posted at 07:27 AM in Chabad, Outreach | Permalink

A bookshelf doesn’t garner much attention. Its shelves are divided into sections like child-rearing and art. It’s only the titles in the adult literature section that seem incongruous: Bringing Heaven to Earth, Opening the Tanya, and My Spiritual Journey.