Chabad Through Rose Colored Glasses: As Chabad Rabbis Gather In Brooklyn, NY Times Coverage Focuses Only On The Good

The Times does not mention Rubashkin, the Shmira/Shomrim trial, or any of the many other controversies that Chabad is embroiled in worldwide. 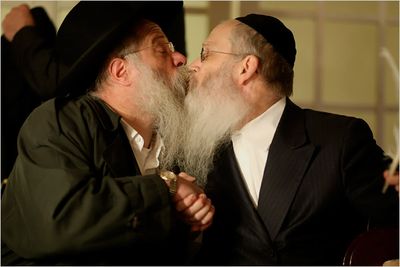 Emissaries of the Chabad-Lubavitch movement are a hardy lot — part envoys, part pioneers — who agree to settle anywhere in the world where their leaders decide that Jewish communities need bolstering, whether in Anchorage or Bangkok or northern Kyrgyzstan.

Often the only Lubavitchers for miles around, they are used to being gawked at and asked to explain themselves, usually in a nice way, though not always. “How long did it take to grow that beard, dude?” is a pretty common query in the United States, they say.

But for three or four days a year, during the annual International Conference of Emissaries held at Chabad headquarters in Crown Heights, Brooklyn, the world of the emissary becomes a kaleidoscope of the familiar.

“Everyone here looks like me,” said Rabbi Eliezer Zalmanov, gazing amusedly Thursday night at the procession of Hasidic men — uniformly bearded, black-suited and fedora-topped — plying the sidewalk in front of a Hebrew school where the opening session of this weekend’s conference was being held. “Everyone here knows what we’re about. It’s one of the reasons you get together — to recharge, to inspire one another.”

This year’s meeting of 4,000 men living in 75 countries and 47 of the 50 states — their wives hold a separate conference in the spring — is the first time most have seen one another since a shattering event among their group. In November 2008, a married emissary couple with Brooklyn ties were killed during a terrorist attack in Mumbai, India, in which 171 people died.

It occurred just a few weeks after the husband who died, Rabbi Gavriel Holtzberg, attended the annual men’s meeting in Crown Heights. During a coordinated assault that lasted three days, the attackers seized the Chabad Center, killing Rabbi Holtzberg; his wife, Rivka; and four Jewish guests, and destroyed the building where it was housed.

Events in memory of the victims are scheduled throughout the conference this weekend. On Thursday, rabbis took turns lettering a Torah scroll that will replace the one destroyed in the attack.

But the enthusiasm of the emissaries for their mission — to restore Jewish life wherever it has dwindled, whether by attrition, or by murder — was not apparently diminished.

Rabbi Abraham Berkowitz, the emissary who went to Mumbai to rebuild the center after the attack, said there has been an outpouring of support from individuals and government officials there. “Our focus is always on restoration, on moving ahead,” he said, “so that not one day should go by during which those terrorists should prevail.”

For the most part, the Chabad emissaries assist small communities that have no rabbi of their own, or that seem to need a shot of enthusiasm to generate greater participation in Jewish life. Though Chabad is a Hasidic movement, it reaches out mostly to non-Orthodox or secular Jews.

When Rabbi Mendel Lifshitz and his wife, Esther, arrived in Boise, Idaho, in 2004, he went into the downtown business district and just “knocked on office doors, looking for Jews,” he said. In one office, a man scrambled into the waiting room in distress, worried that the only reason a rabbi would be looking for him was to inform him of a death in his family.

He was relieved, the rabbi said, “when I told him, ‘I just want you to know about the Chabad center we have opened in town.’ ”

In Eastern Europe, the organization seeks to reintroduce hundreds of thousands of people to their Jewish identities. “After the fall of the Berlin Wall, there came over the wall an entire generation of young Jews who knew nothing about what it means to be Jewish,” said Rabbi Yehuda Teichtal, who settled in Berlin 13 years ago with his wife, with whom he has five children.

“Many came from the east to Germany, and Germany now has the world’s fastest-growing Jewish population,” he said, adding after a long pause: “This is very moving for us. That in this city, which once represented the essence of darkness and evil, where the Holocaust was planned, there is now a thriving Jewish community.”

The weekend conference, while implicitly paying tribute in almost every speech and program to the great themes of Jewish history, focuses most of its daily work on practicalities.

Workshops are offered on how to get the most out of advertising dollars, how to negotiate the vagaries of local zoning codes and how to run a Hebrew school in a place where little Jewish education was previously available and where the students, as a result, range in age from 7 to 60.

Rabbi Mendel Druk, who lives in Cancún, Mexico, with his wife and two children, strode outside after one workshop and raised his hands with delight in a cool gust of wind that sailed off Eastern Parkway’s broad expanse.

“Ah,” said the rabbi, who grew up in Detroit and is now committed to living the rest of his life where the average temperature is 84 degrees. “Cold air!”

Chabad has dozens of active zoning fights, many of which started by Chabad buying a residential property and then illegally using it as a synagogue.
In these cases, Chabad is fighting the towns and claiming in effect the First Amendment allows them to use regularly a private home as a synagogue.
Yet somehow the Times manages to report a workshop on "how to negotiate the vagaries of local zoning codes" without mentioning these very public zoning battles.
One of the issues surrounding the Mumbai attack was Chabad's woefully inadequate security. Even Chabadniks close to Gabby Holtzberg, HY"D, made this point in the attack's immediate aftermath. Gabby himself had allegedly asked Chabad World Headquarters in Brooklyn for help because of the security threat. Allegedly, Chabad World Headquarters did not provide that or any other help, and there was a lot of anger last year because of this.
The Times could have asked about security at Chabad Houses, seen what has been done since Mumbai to improve, and could have asked rabbis at the conference how they as individual Chabad representatives deal with security in the aftermath of Mumbai.
The Times also doesn't mention the ongoing Shmira/Shomrim assault trial, which exposes the deep internal rifts in Chabad, and it doesn't mention Rubashkin.
All in all, a very weak piece.
NY Times Slideshow Of The Shluchim Conference.

Chabad Through Rose Colored Glasses: As Chabad Rabbis Gather In Brooklyn, NY Times Coverage Focuses Only On The Good

The Times does not mention Rubashkin, the Shmira/Shomrim trial, or any of the many other controversies that Chabad is embroiled in worldwide.
Failed messiah was established and run in 2004 by Mr. Shmarya (Scott)Rosenberg. The site was acquired by Diversified Holdings, Feb 2016.