Brooklyn Hatan Who Jumped To His Death 2 Days After Wedding Did So Because Of Sex Abuse Suffered As A Child, NY Post Says

Motty Borger was tormented by memories of being sexually molested as a Jewish student. 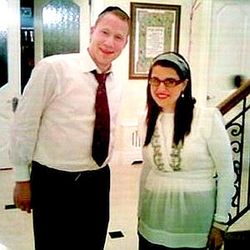 A Brooklyn newlywed who jumped to his death from a hotel balcony the night after his wedding was tormented by memories of being sexually molested as a Jewish student, sources say.

After joyfully singing and dancing at their lavish celebration in Williamsburg on Nov. 3, Motty Borger, 24, bared his secret anguish to his bride, Mali Gutman, the next day -- and the revelation caused a strain, a source close to the family told The Post.

"That entire day he discussed it with her. He told her the story of his life, how he felt so awful and he couldn't go near her," the source said. The couple had met just last July, after a matchmaker set them up.

"When he got married, he realized he couldn't face up to it, and he told his wife that he needed help."

The stunned bride responded, "So, why did you marry me?"

Borger reportedly answered, "You are absolutely right. It was not right of me to get married."

At 6:45 a.m., while Mali slept, Borger climbed a railing outside their seventh-floor room at Avenue Plaza Hotel and leaped, police say. He died hours later at a hospital.

Friends insist that Borger -- described as fun-loving, smiling and cheerful -- wouldn't take his own life.

"I know Motty, and I know he didn't jump. It was an accident," one said. The rabbi who spoke at his funeral called reports of suicide "wickedness."

A security video at the hotel shows him looking "agitated" in an elevator with his wife, cops said.

The city Medical Examiner ruled his death a suicide. The NYPD is investigating the sex-abuse allegations, said a police official.

A source familiar with the tragedy said Borger had confided in close relatives that he was molested while a teen attending a yeshiva, possibly by a rabbi, but they never went to police.

Brooklyn Hatan Who Jumped To His Death 2 Days After Wedding Did So Because Of Sex Abuse Suffered As A Child, NY Post Says

Motty Borger was tormented by memories of being sexually molested as a Jewish student.
Failed messiah was established and run in 2004 by Mr. Shmarya (Scott)Rosenberg. The site was acquired by Diversified Holdings, Feb 2016.