The decision spares Rubashkin a second federal trial on 72 immigration-related charges. But the former vice president at Agriprocessors, Inc. still could spend the rest of his life in prison. The maximum sentence for his convictions adds to 1,255 years.

Federal jurors convicted Rubashkin last week of all but five of the 91 business fraud charges listed in a 163-count indictment. But supporters of Rubashkin, the former vice president at Agriprocessors, Inc. in Postville, continued to maintain that he had done nothing illegal.

Assistant U.S. Attorney Peter Deegan Jr., one of three federal prosecutors who argued the case, wrote in court papers that any further convictions “would be entirely eclipsed by (Rubashkin’s) recommended guideline sentence on the counts for which he has already been convicted.”

Deegan said Rubashkin has already been convicted of the most serious charges listed in the indictment. Dismissing the charges also will avoid an extended and costly trial and lessen the inconvenience to possible witnesses, he said.

This is not to minimize the importance of those counts, but at least of the purpose of the advisory sentencing guideline range, any convictions on (the immigration counts) would have no impact on the defendant’s sentence,” Deegan wrote.

Deegan also said the jury’s verdicts on several of the fraud and false statement counts were premised, at least in part, upon Rubashkin knowingly making false statements to the bank with regard to the harboring of undocumented aliens at Agriprocessors Inc.

He also said the jury found that Rubashkin committed his crimes by falsely stating Agriprocessors was in compliance with all laws when Agriprocessors and its employees were harboring or conspiring to harbor undocumented aliens.

Rubashkin lawyer Guy Cook said today he viewed the dismissal of the immigration charges as a victory for his client.

“Frankly, the government should have done this a long time ago. In spite of the way the government characterizes things in its motion, we believe it overstates the verdict on the financial case in South Dakota. Rubaskin has steadfastly denied the immigration charges. He has pled not guilty. In spite of the raid of May 12, he continues to assert he committed no crimes,” Cook said.

Bob Teig, a spokesman for the U.S. attorney’s office, said he could not comment.
Rubashkin is being held in the Linn County Correctional Center in Cedar Rapids. He is awaiting a ruling by Judge Linda Reade on a request by his lawyers that he be released on bail while he is awaiting sentencing.

Cook said he plans to file a motion this week for a new trial, based on what the defense believes are legal errors in the prosecution and trial of the case. If the new trial motion is not granted, an appeal will be filed, he said.

UPDATE 12:55 pm CST – I spoke with the Clerk of the Court. Judge Linda Reade has accepted the government's motion to dismiss the immigration charges against Rubashkin and Agriprocessors without prejudice: 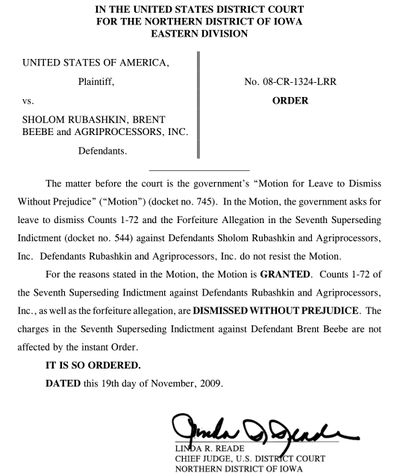