« IDF Chief Rabbi: Soldiers Who Show Mercy To The Enemy Will Be "Damned" | Main | Chabad Through Rose Colored Glasses: As Chabad Rabbis Gather In Brooklyn, NY Times Coverage Focuses Only On The Good »

Hundreds of the demonstrators attacked reporters covering the protest. The haredim hurled gravel and various other objects at the journalists, but no one was injured.

Haredim protest outside Intel
Some 1,500 ultra-Orthodox gather outside electronic chip maker's offices in Har Hotzvim neighborhood in protest of its opening on Shabbat; Intel says won't give in to pressure
Ronen Medzini • Ynet 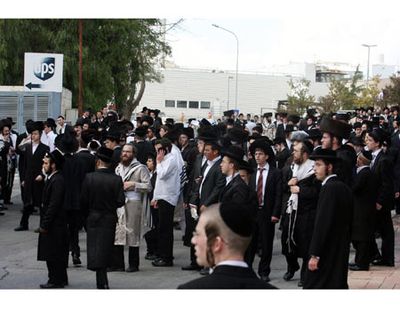 Some 1,500 haredim arrived at electronic chip maker Intel's offices in the Har Hotzvim neighborhood in Jerusalem on Saturday to protest the fact that the company employs dozens of workers on Shabbat. The protested ended relatively peacefully with isolated incidents taking place.

After almost two hours of relative calm, hundreds of the demonstrators began attacking reporters covering the protest. The haredim hurled gravel and various other objects at the journalists, but no one was injured.

Another incident occurred when Deputy Jerusalem Mayor Yitzhak Pindrus of the United Torah Judaism party arrived at the scene.

The ultra-Orthodox demonstrators forced him out of the area, and protested against the fact that despite his being haredi as well, he has failed to use his position to prevent the Shabbat desecration.

Police forces blocked the roads leading to the Har Hotzvim compound so as to prevent seculars from accidently entering the area with their vehicles. Police and security officers were scarce within the compound, and were mostly operating outside of it. 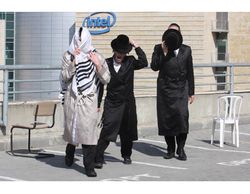 In response to the protest, Intel said in a statement: "We will continue with our routine according to the need that we are committed to." Intel employees were inside the plant at the time of the protest.

The large number of participants in the demonstration is the result of the many calls the community's head rabbis made urging the public to join the protest, as well as the rare cooperation between the Edah Haredit and the mainstream ultra-Orthodox public.

Police backed up their forces in the capital on Saturday ahead of both the Intel protest and the Karta parking lot protest to take place later in the day.

Police sources told Ynet they would block any haredi attempts to break in to Intel's offices or block the entrance to the parking lot.

Intel also prepared for the worst on Thursday, and placed a barbed wire fence around the compound. "We always worked according to our needs, and if needs call for it – we work on Shabbat as well, all in accordance with the law. There has been no change in the status-quo," Kobi Becker of Intel Israel told Ynet.

Efrat Weiss contributed to this report.

(IsraelNN.com) Computer chip giant Intel may close down its Jerusalem plant because of the protests by Hareidi Religious Jews against it, a source within Intel told Arutz Sheva's Hebrew service.

Hundreds of hareidi religious Jews picketed outside the plant at the Har Hotzvim hi-tech industrial area in Jerusalem Saturday, in protest of the fact that the plant employs workers on the Sabbath. Police say the protesters attacked journalists and there was evidence that some damage was caused to the plant's front door.

The protesters dispersed quietly and no one was hurt.

100 hareidi protesters demonstrated against Sabbath desecration at Shivtei Yisrael Street in Meah Shearim, Jerusalem. A police force was on hand. No violent incidents were reported.

Attempts to reach a compromise regarding work in the plant failed at week's end. The religious representatives suggested that only non-Jewish employees work on Sabbaths but the plant rejected this possibility.

MK Nitzan Horowitz (Meretz) warned Saturday that the demonstrations against Intel could “cause the city's economic base to flee.”

"Plants and firms like Intel not only supply sustenance to residents of Jerusalem, they also sustain the public coffers and enable the city to supply services to the populace, including the hareidis,” he said. “The eida hareidit [a stream within the hareidi world -- ed.] is only looking for battles that will keep it united and enable it to raise money abroad, and we all pay the price,” he added.

Hundreds of the demonstrators attacked reporters covering the protest. The haredim hurled gravel and various other objects at the journalists, but no one was injured.
Failed messiah was established and run in 2004 by Mr. Shmarya (Scott)Rosenberg. The site was acquired by Diversified Holdings, Feb 2016.