The first is simply amazing: James L. Kugel's How To Read The Bible.
We tend to view Tanakh narrowly. When we study Humash, the Pentateuch, we tend to understand it through Rashi's commentary.
Kugel's book shows us how the text was viewed before Rashi's time. It also explains how modern secular scholars view the text.
The result is often two profound and competing views of its meaning.
Even those who believe secular scholarship wins out will come away with a new appreciation for ancient religious interpretations of the text. 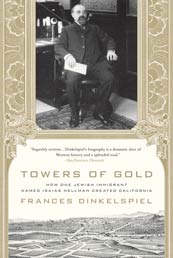 The second book is one I've been meaning to recommend for quite some time: Frances Dinkelspiel's Towers of Gold: How One Jewish Immigrant Named Isaias Hellman Created California.
I was jarred out of my forgetfulness when I noticed Tablet Magazine's review of Dinkelspiel's lucid and immensely enjoyable work.
Isaias Hellman's response to bank runs (he, in effect, owned Wells Fargo), panics and natural disasters of epic proportions reveal a deeply ethical man whose character in many ways allowed California to survive these disasters.
Dinkelspiel's book is both history and memoir – she's Hellman's great-great granddaughter.