I don't think the study proves what Birthright claims it does. My remarks are posted after the Forward article: 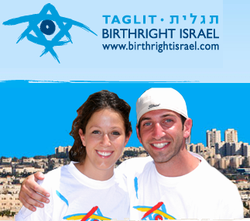 The donors who have sent more than 200,000 young Jews on free trips to Israel over the past decade have been rewarded with a bit of reassuring news: Those returning from the trips are more likely than their peers to go on to marry other Jews.

According to a new study about the long-term effects of the Taglit-Birthright Israel program, 72% of married alumni are wedded to other Jews, compared to a rate of 46% among a control group of young Jews who never went on one of the fully subsidized, 10-day trips to Israel. In this finding, the researchers from Brandeis University’s Cohen Center for Modern Jewish Studies even factored out individuals raised in Orthodox homes. According to the study’s authors, the uniqueness of the survey was that it was able to track behavioral change over a longer time period than previous research. It included more than 1,000 individuals who had applied to go on Birthright trips between 2001 and 2004, both participants and those who did not end up going on the trip.

Studies had been conducted in the past that showed attitudinal changes, said Leonard Saxe, the lead researcher, but those were done while the participants “still had hummus in their bellies.”

The study’s results were met with satisfaction when they were presented October 26 in New York to a roomful of Birthright supporters, including the program’s founders, mega-philanthropists Charles Bronfman and Michael Steinhardt.

The president of Boston’s Combined Jewish Philanthropies, Barry Shrage, characterized the report’s findings as a “tipping point.” He called Birthright’s success “some species of miracle,” but also warned, as many of those present did, that more had to be done both to ensure Birthright’s future by bringing in more donors and to follow up with returning participants.

“If we act now, future generations will remember that at exactly this moment, the Jewish community rose to the challenge, and we will be blessed,” Shrage said. “If not, it will be one more example of us failing to make the most of an opportunity.”

Steven M. Cohen, a Hebrew Union College sociologist was not part of the research team but attended the presentation at Brandeis House on Manhattan’s Upper East Side, said that the study’s findings “eminently check out.”

Lead researcher Saxe told the Forward that the dramatically higher figures for in-marriage among Birthright alumni could not be attributed to any factor other than the trip’s “effect” on participants. “There’s really no other explanation other than that they participated in Birthright and this changed their view of their identity,” Saxe said.

The only voice to pierce the self-congratulatory tone of the gathering was that of Birthright co-founder Steinhardt. During the question-and-answer session, he stood up and railed against the notion of time and energy being spent on reports and what he called “dialogue.”

“This study is an important study, and I think it says some very significant things,” Steinhardt continued. “But do you recall any Jewish study meaningfully changing the Jewish world over the last 20 or 30 years? I don’t.”

This is an extremely flawed report.

First of all, Jews eligible for a Birthright trip who do not apply to go on one, or who are not persistent in trying to get a slot, are arguably far less connected to the Jewish community than those who opt to go or who are persistent in trying to get a slot. Even those who come from Jewish homes with zero Jewish observance but who opt to go or who persistently try to get a slot would be arguably more connected to the Jewish community and their Jewishness than the others who aren't persistent or do not apply.
The study's control group is made up of those who applied but did not actually go on a trip. They did not go for several reasons: no opening at a time convenient for them, no opening on the trip they wanted, could not bring non-Jewish boyfriend or girlfriend, found other things to do, changed their minds, etc.
The more connected a potential participant is to the Jewish community (i.e., to a campus Jewish organization or group or to other Jewish community organizations) the greater chance that person has of getting on a trip of their choice. This means that, of the overall group of potential participants, more connected people will skew toward going on a trip while less connected people will skew away from going.
That clearly impacts the study's findings. 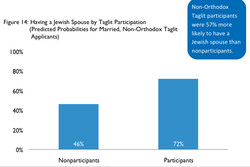 For example, the study found that non-Orthodox participants were 57% more likely to marry a Jew than non-participants.
But remember, participants are the people who chose to take a free trip to Israel. Those who did not make that choice arguably care much less about being Jewish. And the data set of participants who married is so small, it should be considered statistically insignificant. So you can't really credit Birthright with fostering Jewish marriages.
Indeed, the study found that non-Orthodox participants were far less likely to be married several years after their trip than were non-participants.
I believe this shows that non-participants were far more likely to be in a serious relationship at the time they were eligible for their trip than were participants. This also accounts, I think, for at large part of their higher rate of marriage, especially because that relationship partner could not qualify for a Birthright trip if that partner was not Jewish during the time of eligibility.
And this si the part of this self-funded study Birthright is touting.
Taking young, impressionable people anywhere – especially anywhere exotic – on a ten day indoctrination trip will lead to similar results.
As I told two journalists yesterday, including one who called from Israel, if these same people had been taken to Brazil on a ten day trip similar to Birthright, you'd see very similar results in most study categories. Arguably, we should should see much higher results bringing Jewish people to Israel. But we don't – at least when those people go to Israel on a Birthright trip.

This study openly shows Birthright has zero impact on affiliation, which confirms an earlier critical study of Birthright. and it also shows the more Jewishly involved a person is before going on Birthright, the less impact the trip has, to the extent that people coming from kosher homes – which includes a number of non-Orthodox homes and marginally Orthodox homes as well as Orthodox and haredi ones – show no statistically significant changes in attitudes or practice in almost every category.
Birthright is a top heavy, top down, ham-handed organization that took a great idea and made it pedestrian.
The answer isn't to take participants to Israel and lecture them on marrying Jewish, and the answer isn't segmenting participants by preexisting denominational or affinity preferences. And, for that matter, the answer isn't thirty-something (or forty or fifty-something) New York and Jerusalem-based executives planning trips for twenty-year-olds.
The answer is to allow the 20-year-olds, within set but not overly rigid guidelines, to plan their own trips and manage the experience and its after-trip followup.
One way this could be done is to have various pods available – a day trip to Masada, a half day in Mea Shearim, a half day at Yad Vashem, two days in the north, shopping in Tel Aviv, Jerusalem's Old City and the Kotel, Arab Israel, the 67 border, etc. Each pod could have several different providers to choose from and trip organizers could select which pods and which providers they want, or could opt to take a pre-planned trip from a provider.
Followup should also be a bottom up, not top down, experience largely run by the participants themselves.
If Birthright would make these changes, I believe it would show much higher rates of post-trip affiliation. And, properly done, it should save money, as well.
Doing this would mean some Birthright employees and contractors will have to be phased out. Many of those would be employees of Birthright-Next's designated New York City post-trip followup provider, the Jewish Enrichment Center. (And here and here.) The JEC itself is highly problematic as is Birthright's NYC followup head, a Steinhardt family crony. (Read the previous links to see why.)
And that in all probability means making the necessary change is unlikely.
Take a look at five graphs from the study that support my points. The whole study is posted after them as a PDF file, and there is a link to an index of previous Birthright posts, as well.
Please click to enlarge: 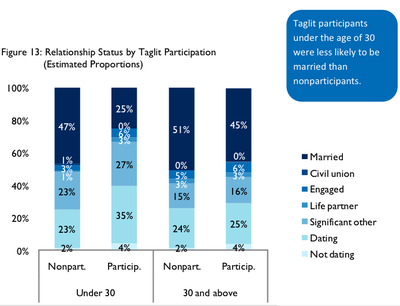 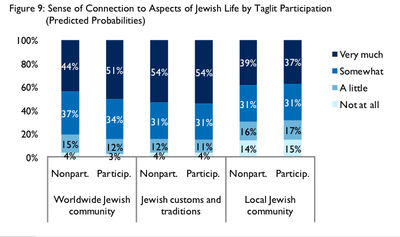 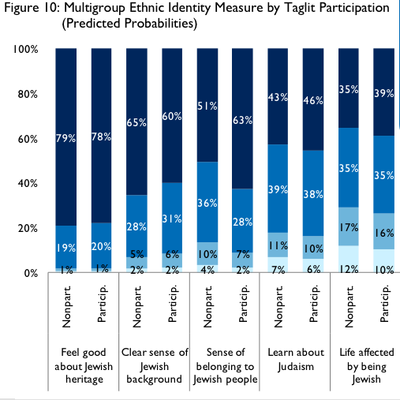 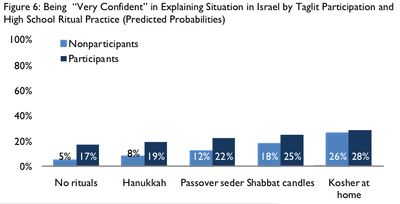 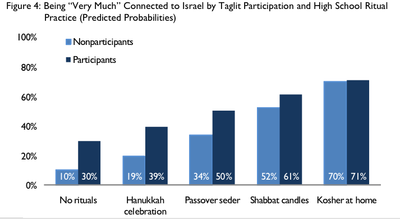 Posted at 10:10 AM in Israel, Jewish Leadership | Permalink

Flawed study, paid for by Birthright's mega-donors, used in attempt to counter persistent reports of Birthright's failures.
Failed messiah was established and run in 2004 by Mr. Shmarya (Scott)Rosenberg. The site was acquired by Diversified Holdings, Feb 2016.