"Most historians were skeptical. But the genetic evidence is one of the most surprising stories we've encountered." 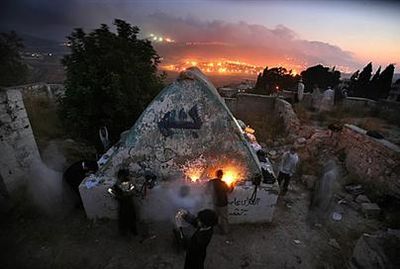 Haredim pray near the tomb of Eleazar, the son of Aaron, in the West Bank. Photo credit: Menahem Kahana/AFP/Getty Images Files.

Dr. Karl Skorecki works on the cutting edge of molecular science, revolutionizing medicine through genetics and the use of stem cells to test anti-cancer therapies.

But as a sideline, the former University of Toronto professor has become world famous for applying genetics to genealogy and transforming history. He has found evidence to support traditional claims that modern-day Jewish priests, Cohanim, are descended from a single common male ancestor - biblically said to be Aaron, the older brother of Moses.

Among the other intriguing findings he has uncovered: that 40% of Ashkenazi Jews can trace their descent to four "founding mothers" who lived in Europe 1,000 years ago, evidence that all Jewish communities share a common paternal origin in the Near East, and genetic evidence supporting claims southern Africa's Lemba tribe may be Africa's "Black Jews."

"It began as a hobby, but it took on a life of its own," Dr. Skorecki says. "I didn't think anyone would really be that interested. I'm a nephrologist and a physician but I've always been interested in the genetic predisposition to disease."

Fifteen years ago, as he attended Shabbat services at his Toronto synagogue, Dr. Skorecki says his mind wandered during the reading of the Torah.

"A Cohen [Jewish priest] of North African, Sephardic, non-Ashkanazi origin was called up to read the Torah and it just got me to thinking what we have in common," he says.

"I myself am also a Cohen, but of recent European ancestry. It struck me as interesting that, on one hand, our paternal genealogies have been geographically separated for at least a thousand years. Yet, on the other hand, we share a Biblical oral tradition of common male ancestry dating back more than 100 generations."

According to tradition, the status of priest (Cohen) was conferred on Aaron and his sons, and has been passed on from father to son ever since the Exodus from Egypt.

As he sat in his Toronto synagogue, Dr. Skorecki says, "I realized if that were true, then it was a scientific hypothesis that was testable."

He reasoned the Cohanim should all have a common set of genetic markers at a higher frequency than the general Jewish population. After consulting Dr. Michael Hammer, a geneticist at the University of Arizona and a pioneer in studying the Y chromosome, the two men developed an experiment to test his thesis.

Besides determining maleness, the Y chromosome consists almost entirely of non-coding DNA, which is passed from father to son without recombination. Therefore the genetic information on a Y chromosome of a man living today is basically the same as that of his ancient male ancestors, with rare mutations that occur along hereditary lines.

By tracking those neutral mutations or genetic markers scientists can come up with the genetic signature of a man's male ancestry.

Dr. Skorecki's test found an array of six common chromosomal markers in 97 of the 106 Cohens he tested. Calculations based on variations of the mutations rooted the men's shared ancestry 106 generations in the past - 3,300 years ago, or the approximate time of Exodus.

He also discovered the common set of genetic markers in both Ashkenazi (European) and Sephardic (North African) Cohens, indicating they shared the same ancestry before their communities were separated more than 1,000 years ago.

"It's amazing," Dr. Skorecki says. "It's like an archeological finding. But instead of digging up in the sand, we dig in contemporary DNA."

His findings triggered a storm of interest in Jewish genealogy and the application of DNA analysis to the study of history.

The only child of Holocaust survivors, Dr. Skorecki was born and raised in Toronto. He took his medical degree at the University of Toronto, where he taught for 11 years before moving to Israel in 1995.

He is now director of the Rappaport Family Institute for Research in Medical Sciences and a researcher at the Rambam-Technion University Medical Center in Haifa, Israel's largest medical centre. After moving to Israel, Dr. Skorecki continued to dabble in genetic genealogy and conducted studies that suggest there is genetic evidence to support a common paternal origin for all Jewish communities.

In yet another study, Dr. Skorecki discovered an unusual genetic signature, thought to have originated in Central Asia, in more than half the Levites of Ashkenazi descent.

"They seem to be the descendants of one man who lived about 1,000 years ago somewhere between the Caspian and the Black Sea," he says. "Whether his ancestors originated there or he migrated from the Near East is unclear. We can't tell. But that is also the time and location of the mythical Khazar kingdom."

Dr. Skorecki says one of the most surprising discoveries of his genetic analysis of Jewish genealogy involves claims by the Lemba tribe of southern Africa to have Jewish origins.

The Bantu-speaking tribe of roughly 70,000, now mostly Christians, are spread across South Africa, Mozambique, Malawi and Zimbabwe. But the tribe's oral history claims Jewish ancestry, saying their founding fathers were Jews, led by a man named "Buba" who sailed to East Africa.

Unlike any of their surrounding neighbours, the Lemba observe many Jewish traditions, such as kosher-like dietary restrictions and slaughter practices, male circumcision and one holy day a week.

"Most historians were skeptical," Dr. Skorecki says. "But the genetic evidence is one of the most surprising stories we've encountered."

It is not clear whether the genetic origin was Jewish or Arab or a mixture. But a strikingly high number of Lemba males also carry the same genetic signature markers Dr. Skorecki discovered in modern-day Jewish Cohanim.

More remains to be done, but Dr. Skorecki is convinced genetic research is a powerful tool for historical study.

"It's not perfect. It's not physics. But it is not less reliable than lets say fossil records, archaeology, liturgy or oral histories," he says.

"In the larger context it adds further insight."

Posted at 09:01 AM in History, Religion, Religion & State, Science | Permalink

"Most historians were skeptical. But the genetic evidence is one of the most surprising stories we've encountered."
Failed messiah was established and run in 2004 by Mr. Shmarya (Scott)Rosenberg. The site was acquired by Diversified Holdings, Feb 2016.