Witness: Rubashkin cashed insurance policy to get cash for plant 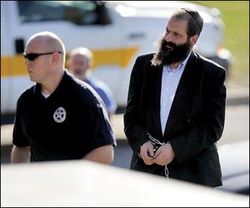 Sioux Falls, S.D. – Lawyers for Sholom Rubashkin today hammered a government witness who testified that the former Postville meat-plant executive was at the center of an alleged massive bank fraud scheme.

Defense attorneys emphasized the plea deal that Yomtov “Toby” Bensassson struck with federal prosecutors in exchange for his cooperation.

Bensasson, the former controller at Agriprocessors Inc., pleaded guilty in August to one fraud conspiracy charge, although he admitted earlier this week that he falsified hundreds of company records to defraud a bank.
Advertisement

The admission was part of Bensasson’s testimony against Rubashkin, a former vice president at the Agriprocessors, Inc. kosher slaughterhouse in northeast Iowa. Rubashkin has pleaded not guilty to 91 financial fraud charges including mail, wire and bank fraud, money laundering and failing to pay livestock providers in the time required by law.

“Nobody wants to go to prison,” Bensasson said.

“You nevertheless have convicted yourself” of the conspiracy charge, Cook said.

“And you face a fine of as much as a quarter-million dollars, and restitution?”

“You pleaded guilty, convicting yourself?”

Bensasson testified that Agriprocessors survived on borrowed money. At one point, he said, Rubashkin cashed in his own life insurance policy to keep the plant operational.

The trial continues this afternoon, but will not take place on Friday. Testimony resumes Monday.