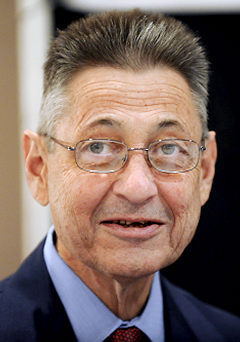 An upstate Republican who's eying a run for governor has compared Shelly Silver, the Orthodox Jewish speaker of the state Assembly, with Adolf Hitler and the anti-Christ.

The slur came during a speech Saturday night to fellow Republicans in Buffalo, while slamming Albany's notorious "three men in a room" budget process - in which the governor and legislative leaders make deals in private.

Collins referenced famed French seer Nostradamus' prediction that there would be three anti-Christs before the Apocalypse.

He said it's generally accepted the first was Napoleon and the second Hitler.

He said he was "pretty sure" the third is Silver, a Manhattan Democrat, two attendees at the Erie County GOP's annual fall fund-raiser at the Adam's Mark Hotel said. 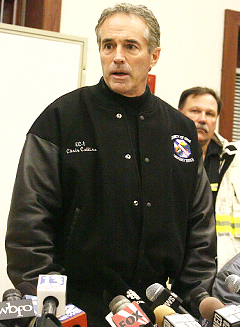 "No one clapped. No one cheered. No one laughed," said a Western New York Republican who was at the event. "I know I didn't. I thought it was a little harsh to be calling someone an anti-Christ."

Through his spokesman, Collins said he had made a "poor joke" and extended his "sincerest apologies" to Silver.

"While we may disagree strongly on policy matters, my statement had no place in our political discourse and I am truly sorry to both the speaker and to anyone else who I may have offended," Collins said.

An Erie County Democrat was not surprised by Collins' remarks, saying: "The statewide media can expect to see a lot more of these types of foot-in-mouth moments . . . . He's an extremist who doesn't think before he speaks."

Collins was elected county exec in 2007. He has been raising money for a possible 2010 gubernatorial bid, but says he won't run if Rudy Giuliani does.

Posted at 07:20 AM in Antisemitism | Permalink